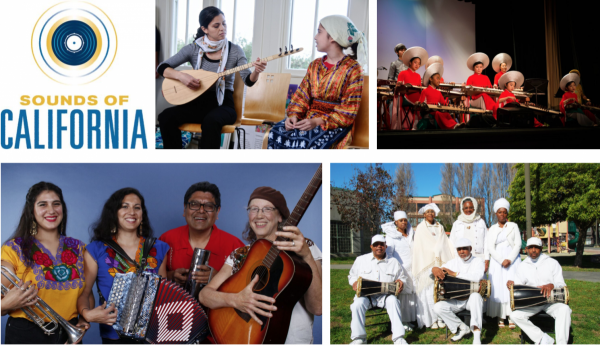 In this Sounds of California Bayview concert on April 29, 2018, our musical artists ponder displacement, migration, and creating a new sense of home. They musicians hail from the Bay Area’s African-American, Vietnamese, Kurdish, and Chicano communities.

Sounds of California takes place in the heart of the Bayview-Hunter’s Point neighborhood, once the pristine coastal fishing grounds of the First Peoples: the Muwekma Ohlone tribe. They understood the bountiful waterways of the area and sailed their boats between what is now India Basin to the East Bay to trade goods. Their shellmounds dotted the coastline of the Bay, along the modern-day Bay Trails that are now being converted into neighborhood walking and bike paths. The Muwekma Ohlone lived in this area over 5,000 years ago, but they are not forgotten or extinct. They continue to live and thrive in the Bay Area today with a near dormant language in use, and the next generation is taking their indigenous knowledge into the future.

Then, during World War II, employment drew many African Americans to Hunter’s Point in the search for a better life. The housing project on the hill is a stark reminder of the 1940’s housing, which a few decades later became the “projects,” a site of contention and poverty in the 1970’s. Today, the Bayview is at the nexus of gentrification, with demands for new housing and development due to the Bay Area’s booming tech economy. Transformation is the heart and soul of this neighborhood. The theme of Sounds of California Bayview is migration and change, much like the transitional nature of this neighborhood.

The history of the Bayview-Hunter’s Point neighborhood embodies the very questions we ask ourselves in the Sounds of California program: What does home mean when your lineage is disrupted by migration, war, coercion, economics, or personal choice? What makes us belong to a place? What is the sonic footprint we carry in our hearts and minds to give us a sense of home? What do you carry in your memory that helps you know that you belong?

How these ideas translate into the songs and stories we share offer us a reflection of who we are and what connects us to a place. For all of the musical artists in this program, there is a long line of memory extending perhaps generations.

As a child in Turkey, Isik Berfin grew up surrounded by her mother, Özden Öztropak’s songs and instruments made by her great-grandfather. Her family belongs to the minority Kurdish-Alevi community, which historically suffered persecution in Turkey. Berfin and her mother later moved to San Francisco, where music took on even more meaning in their lives.

“It was something I was born into,” 21-year-old Berfin says,”but when I came to the U.S., I understood that I have to keep this alive; I have to tell people who I am so that it won’t die.”

For the Peña-Govea Family, music is a key part of their life. Miguel Govea and Susan Peña raised their two daughters in San Francisco’s Mission District, where they grew up singing regional Mexican music around the kitchen table. Today, Mr. Govea teaches music to youth from Central America who recently arrived in this country alone.

Rewind to the 1970’s, when Vietnamese refugees arrived into the U.S. at the end of the Vietnam War. As a teenage refugee, Hang Le To settled in San Francisco, and later started volunteering at the Au Co Cultural Center. She now serves as Executive Director of the center, which hosts Vietnamese language classes and helps children of immigrants learn their parents’ language. In 2010, Ms. Le To founded Au Co’s music program, now well-known for its dynamic Vietnamese zither (Đàn Tranh) ensemble that wows audiences nationwide.

The music of the Omnira Institute’s choir preserves West African musical traditions and honors their ancestors, who came to this country as slaves. They also respond to present-day events by bringing their sacred songs and drumming to communities where police violence has claimed the lives of African-American men.

To RSVP, visit the Facebook event page or Eventbrite page.

The Sounds of California initiative is an ongoing partnership between the Alliance for California Traditional Arts (ACTA), Radio Bilingüe, and the Smithsonian Center for Folklife and Cultural Heritage to explore how experiences of immigration are embedded and archived within music, sound, and social practice across our state. Through this project, we are creating a new public collection of music recordings that document the histories and cultures of California’s communities.