ACTA’s California Living Heritage Award recognizes individuals who use folk and traditional art forms to speak about beauty, resilience, strength and inclusion, who have lived a life of service and courage, and whose spirits embody the core of ACTA’s mission: to support ways for cultural traditions to thrive now and into the future. Recipients of the California Living Heritage Award remind us daily of our humanity, inspiring Californians of all generations and backgrounds to connect to their own cultural heritage and to be agents of change. 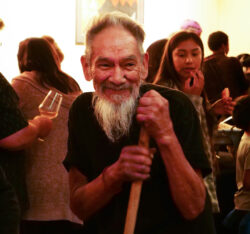 On October 4, 2018, ACTA had the honor of recognizing one of Native California’s most prolific and beloved artists: Brian D. Tripp. Brian is a Karuk visual artist, a poet, a ceremonial singer and dancer, a regalia maker, and a pillar in the indigenous community of Humboldt County. He has committed decades of his life to revitalizing ceremonial life in the Klamath River region, helping usher in a new era of artistic engagement in local indigenous culture. As the recipient of the third-ever California Living Heritage Award, Brian represents the dedication, vision, and courage that allows California’s cultural traditions to thrive for generations.

ACTA recognized Brian Tripp as a major cultural bearer and asset to both California and our nation’s artistic heritage, one of the artistic grandfathers of the whole cultural renaissance and revitalization movement that so many California Indian tribal artists are currently engaged and practicing in (including the artists that ACTA has supported through grants and contracts over 20 years). Tripp has influenced and mentored artists across the state and helped change the landscape of how we view California Indians: in print, in art, and in the spoken word. His greatest gift to his community has been the way in which he has impacted many generations of Californians, giving everyone permission to believe that they could be a singer or a dancer or poet– that they too could carry on their cultural traditions and be an artist. He has made it possible for young, emerging California Indian artists to be proud of their cultural traditions and to be Indian without apology- to be Karuk Indian, no more, no less! We honor Brian Tripp for the caliber of his artwork, his commitment to his traditional art practice, and for uplifting his community by transmitting knowledge, values, skills from generation to generation.

Click here to read more about Brian D. Tripp and the Native heritage of Humboldt County