Nā Lei Hulu I Ka Wēkiu is a hālau hula (hula school) based in San Francisco, committed to the preservation of the Hawaiian culture through hula, sharing the cultural richness of Hawaiin heritage as they celebrate the traditions of their ancestors and create new expressions in Hawaiian dance.

Founded in 1985 by Director/Kumu Hula Patrick Makuakāne, the company of 40 dancers is known for its unique contemporary style called hula mua, or “hula that evolves.”  The style blends traditional movements with non-Hawaiian music like opera, electronic, dance, alternative, and pop.  Both hula mua and authentic, traditional pieces are showcased in the company’s stage productions.

In 2013, funds supported Keiki Hula, a youth program promoting Hawaiian culture through dance.  Two separate classes will be offered to children (5-7) and youth (8-13) with two 12 week sessions in the spring and summer.  The fall session will be 6 weeks long.  Opportunities to continue into the adult school will assure that continued studies in hula, chant, implement making, regalia, and language are available.

In 2011, funds supported two separate classes for youth with two 12-week sessions in the spring and summer and continuing with a six-week session in the fall.  Teaching the classes are hālau member Julie Mau and second-generation hālau member Makani de Silva.  Both have been participants in cultural immersion studies of ancient hula and protocols known as ‘uniki.

In 2010, funds supported a series of cultural immersion workshops on Hawaiian language, dance, and history by Hawaiian elders and experts.  Intended for practitioners of hula, the focus on the invested participation of community members recognizes the importance of personal engagement in perpetuating Hawaiian culture.

In 2006, funds supported an ‘uniki (graduation) ceremony for senior dancers.  Imbued with ancient traditions and protocols, the ceremony culminates a rigorous process of studies in hula and traditional Hawaiian culture. 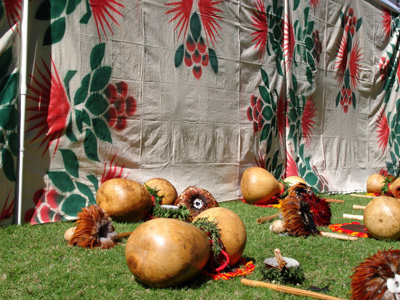 Gourds are grown for instruments which provide the musical accompaniment to Hawaiian hula.   These implements are part of a 'uniki ceremony which is a graduation of advanced training in ancient hula, chant, implement construction, foodways, and other protocols.  Na Lei Hulu I Ka Wekiu's 'uniki ceremony was supported in part by ACTA's Living Culture Grants Program in 2006.  Photo: Lily Kharrazi, 2009