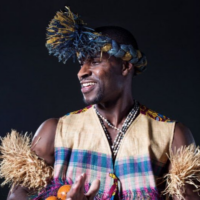 Kiazi Malonga from Oakland, CA, has been learning and performing Congolese drumming and dance as the son and child protégé of his late father, the world-renowned master artist Malonga Casquelourd.  Kiazi has performed with his father’s Fuia Dia Congo Performing Arts Company since the age of 6.  He has a lifetime of experience performing and teaching Congolese drum and dance, and is the current Musical Director of Fua Dia Congo.

Through his experiences in learning under various talented mentors, Kiazi was able to master playing the Congolese Ngoma. Ngoma is derived from the Kongo word for “drum” and refers to musical instruments used by certain Bantu populations of West-Central and Southern Africa. They are used to assist in healing during rituals and to build community in a wide variety of settings from birth ceremonies, to weddings, and funerals. Different Bantu-inhabited regions have their own traditions of percussion, sometimes with different names for their instruments. In addition to Ngoma being a source of healing to many community members, it also helps instill the important values of cooperation and empathy.

“The ngoma grounded me, gave me a sense of my heritage, gave me a strong base from which to appreciate other people, cultures, and traditions.” — Kiazi Malonga 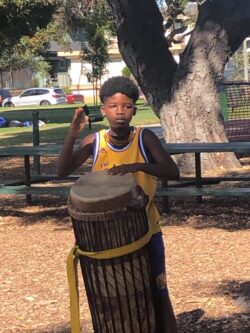 Kiazi will be working with Rumi Hawthorne-Vaughan in learning how to play the Congolese Ngoma. The rhythms under study in this apprenticeship come from various Bantu ethnic groups that reside in Democratic Republic of Congo, Republic of Congo, southern Gabon, and northern Angola. The drums are played usually by open hand in conjunction with song and dance. Both Kiazi and Rumi were born and raised in the Bay Area as members of African Diaspora arts families. Together, they will study the technical aspects of drumming–pushing toward mastery of basic sounds (bass, tone, slap) and variations. Kiazi will be covering several traditional rhythms and focus his instruction on improving Rumi’s competency in performing each of the accompaniment parts. Additionally they will lay the ground work for performance on the lead drum by introducing basic grooves, beginning variations for solos, bell patterns, songs, basic dances and gestures that go with each rhythm.

As a artist in ACTA’s Apprenticeship Program in 2013, Kiazi shared with his apprentice Latanya Tigner (a former apprentice of Mukudji, or stilt dance, with master Shaka Zulu) the historical significance and technical intricacies of Congalese drumming.