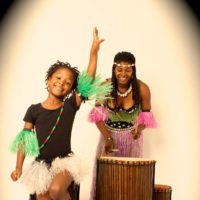 Umoja Ensemble of the Inland Empire

Umoja Ensemble of the Inland Empire is an arts group with a mission to help restore, repair, and regenerate the physical, psychological and spiritual health of the populations served, through the preservation, practice, and presentation of African Arts. They have held performances and workshops across southern California for over two decades.

The Umoja Ensemble received Living Cultures grants from ACTA, under fiscal sponsorship from the “We the People” Cultural Dance Center, to support the Inland Empire’s Ultimate Doundounba Festival, an exciting weekend of workshops in West African Drum and Dance, film screenings, a showcase, and invitational competition. Based on the traditional West African rhythm and dance known as the “strong man dance,” this highly significant rhythm and dance has been practiced for many centuries and represents multiple social and cultural values of Guinea in the western region of Africa. The Doundounba is also an event that brings the community together to showcase artists and create awareness of its values and tradition.