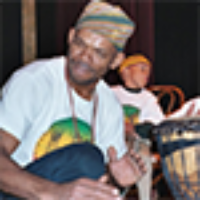 The West African Dunun and Djembe drumming tradition is an old performance art form of the Susu and Mandinka peoples of the region. Versions of these forms can be found throughout West African nations such as Mali, Guinea, Senegal, Gambia, and the Ivory Coast. Dunun, Sangbani, and the Kinkini are a family of three deep, sweet sound bass drums with attached bells played with sticks. The Djembe is a sharp sounding drum, held between the legs and played with two hands. Together, they create beautiful rhythms that support song and dance for a variety of occasions.

Tacuma King was introduced to the tradition of the drum by an older brother in Chicago, where he was born. He later studied with Moshe Millon of the Sun Drummers in Chicago before he moved to the California Bay Area where he met Papa Zak Diouf, master of Western drumming, song and dance. Baba Tacuma demonstrates that the practice of West African drumming is much more than music, song, and dance, but a spiritual manner of communicating that reconnects people to heritage, history, and to each other, leading ultimately to healing.

As a master artist in ACTA’s Apprenticeship Program in 2016, Tacuma King will bestow upon his young apprentices Rumi Akhenaten Hawthorne-Vaughan rhythms and drumming techniques, and the ways of knowing to become a cultural communicator.