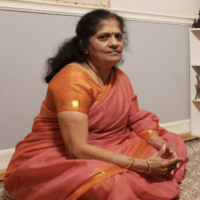 Shubha Narayan, of Cerritos, in Los Angeles County, has been a practitioner and educator of South Indian classical Carnatic music for almost 60 years, through training, performances, and instructing students from the age of 3 to 80, for over 35 years. Shubha also helped establish the South Indian Music Academy (SIMA) nearly 40 years ago, and continues to serve on the committee, helping to propagate Indian classical music to the next generation. The passing down of this music has been an oral tradition, which was passed on to her in Chennai, Tamilnadu, in South India. She now passes it on to second generation Indian-American children, providing them an important link to their culture and heritage.

Carnatic music has its roots in South India and is an important part of culture in the region. This art form is steeped in spirituality, stemming from the Vedas and ancient religious texts, and provides a religious and cultural connection for members of our shared community. The basic elements are śruti (pitch), swara (note), rāga (melodic formula), and tala (the rhythmic cycle) form the foundation of improvisation and composition in Carnatic. Carnatic music is mainly sung through compositions – a form developed between the 14th and 20th centuries by composers such as Purandara Dasa and the Trinity of Carnatic music. Carnatic music is usually performed by a small ensemble of musicians, consisting of a principal performer (a vocalist), accompanied by the violin, and mridangam (percussion). The sound of the tambura acts as a drone throughout the performance.

In 2020, Shubha Narayan will work with her apprentice Saadhvi Narayanan, who has been a student of hers since 2009, in furthering Saadhvi’s practice in South Indian Carnatic vocal music. Saadhvi will be learning compositions in different languages (Sanskrit, Tamil, Telugu, Kannada, Hindi), melodic scales, and rhythms. They will also focus on improving her vocal range, pitch control, breath control, and understanding of rhythmic intricacies, and of unrehearsed improvisational elements, known as “manodharma.” 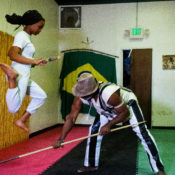