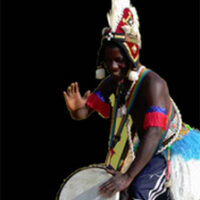 Mamady was born and raised in the village of Oroko near Kouroussa, Guinea, West Africa. From a young age he was able to master his people’s traditional drum music and dances as passed down from his ancestors, earning him the nickname “Wadaba” (Great Panther) because of his powerful sound on the djembe drum. By age ten, he was taking turns as a soloist, and by his teenage years he had learned all of their traditional rhythms, and had achieved the status as one of the lead soloists of his village. Spending part of his time in Guinea, and part at his home in Three Rivers, Central California, Kourouma continues to work with master drumers from his village, teach classes and clinics, build drums, and perform with his ensemble Annye Ben, locally and throughout the world.

When reflecting on the role that Djembe Drumming has played in his life and community, Kourouma describes that “every rhythm has a celebration, dance, spiritual meaning, and story behind it. I am the “Great Panther” and I play because my drum brings power on behalf of my people. I want to share this tradition with people because it makes me feel at home and preserves my family’s history.”

Mamady has been tasked with passing on the rhythms of his people to Donte McDaniel and help him to cultivate a stronger foundation in West African Traditional Djembe Drumming, a form of drumming that is a part of the larger Mandeng (Mandingue) culture and dates back over 400 years. Traditional djembe drumming was originally used during village ceremonies, farming, and dancing. The goal of the apprentice is to refine his djembe technique, including the slap, tone, and bass, and learn learn both the proper feel and emotion involved in playing the djembe. Over the course of 14 one-on-one sessions, Mamady will be instructing Donte on the following foundational rhythms: Kassa, Konden, Sofa, Soli, Fakoli, and Dunun Gbe.