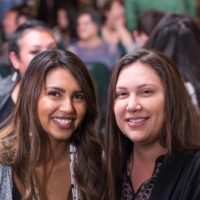 Kapoon Tripp (Karuk, Yurok), a Karuk and Yurok tradition bearer in Humboldt County, first learned to wrap bear grass from her father. She always had a love for regalia making and would often dive into her dad’s good materials and make necklaces and help him when he mended regalia or created new regalia. He was what Kapoon and her wider community call a dancemaker and was a holder of regalia, both his own and that of others, which gave her the opportunity to study and see many styles of regalia and dresses. There are many materials and different ways to use these materials use in regalia and Kapoon feels it is important to share how regalia is made so people can see and learn different techniques and then decide for themselves what inspires them.

Kapoon’s family is responsible for putting on the Brushdance ceremony for the Karuk People at Katamiin, as well as putting up the Karuk Brushdance camp at all other brushdance ceremonies up and down the Klamath River. They are also active in the Ihuk Karuk Womens Puberty ceremony and participate in most of the neighboring Yurok and Hupa Tribal ceremonies, as well.

We believe every dress has its own song when it dances, it has a spirit. I learned to listen to that song and spirit in my dressmaking and I look forward to, and am honored to share this with my niece.
– Kapoon Tripp

In preparation for a family members’ Ihuk Ceremony (a Karuk Young Women’s Puberty Ceremony), Kapoon Tripp and her niece and apprentice Tyithreeha Allen (Karuk, Yurok), will be completing a shell dress to be used in the ceremony. Master regalia maker Kapoon has worked on and completed three ceremonial dresses which she learned by studying older dresses and asking for feedback from other cultural bearers/regalia makers. She is also a basket weaver and has made other regalia (necklaces, hair ties) and so she also drew from those experiences. Tyithreeha will be learning how to cut and lay out the leather for the dress, cut and attach fringe, wrap gathered beargrass and maidenhair fern onto the dress, attach shells, abalone, pine nuts and beads. Together, they will complete both the dress and apron which makes a complete traditional dress.

This dress will also be used in the Brushdance and other ceremonies, and will be shared and worn by other young women who participate in ceremony, as well as passed on for future generations. This dress is made on leather and includes natural materials like beargrass, maiden hair fern, abalone, clam shell, pinenuts and also glass beads.