José “Pepe” Carlos González, of Downey, in Los Angeles County, learned to play the requinto romántico at the age of 13 from Román Flores, a musician from Oaxaca that had relocated to Los Angeles. Pepe’s father hired Román to teach he and his younger brother to play requinto and guitar because his father would long for his native Oaxaca and wanted to teach Oaxacan culture to his sons in their apartment in Koreatown, a largely Oaxacan and Korean neighborhood in Los Angeles.

Trío romántico music developed in Mexico, Cuba, and Puerto Rico and gained pan-Latin popularity in the late 1940s and 1950s. It is characterized by three voices, backed by two or three guitars, singing romantic lyrics. Central to the genre are bolero and ranchera songs. Boleros are songs with blissful, tortured and romantic elements that are rhythmically rounded. Boleros originated in Cuba and spread to and developed in other Latin American countries. Ranchera songs developed in Mexico and are usually triple or duple meter and performed in an extroverted emotional style. Tríos románticos can also play regional styles such as Oaxacan waltzes and “chilena” songs. The melodies are mostly played by the requinto romántico, a soprano guitar tuned higher than the classical guitar. The melodies are often complex and virtuosic. The other guitarist(s) provide the bass, rhythm, and harmony. The group can also include maraca player or other hand percussion instruments.

Pepe is now a full-time musician, playing the requinto romántico and the accordion professionally in the band La Santa Cecilia. He is known as an accomplished requinto player, with a wide repertoire of rancheras, boleros, Oaxacan songs, South American waltzes, and a very unique style that can blend traditional Mexican and Latin styles with blues and rock.

Pepe Carlos is performing the intro melody followed by “adornos” (flourishes) while the singers sing the verses in this video from La Santa Cecilia. The high pitched guitar can be heard throughout.

Pepe will work with Los Angeles musician Mary Alfaro (who was a 2018 apprentice to Jesus “Chuy” Martinez) in deepening her practice of the requinto romántico, including chord progressions and melodies in the trío romántico tradition. This will include boleros, chilenas, waltzes and huapangos, and a particular focus on rancheras. Pepe will teach Mary scale patterns, right hand and left-hand techniques, melodies with double and three part harmonies, and other strategies necessary for learning melodies efficiently. 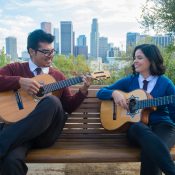 Applications are NOW OPEN for ACTA’s Apprenticeship Program! The Apprenticeship Program is designed to enable sustained, one-on-one training between master artists and apprentices, facilitating the transmission of traditional knowledge and skills. We asked 2018 apprentice Mary Alfaro to tell us about her experience training in requinto romántico guitar with…
June 10, 2019 ACTA Story
View All Articles 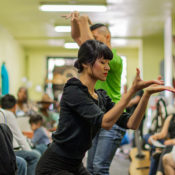 Sharing practices and resources for a more sustainable and equitable arts field.
June 20, 2019
View All Programs