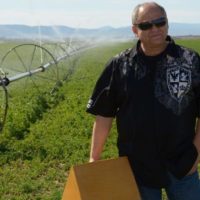 Afro-Peruvian rhythms on the cajón

The cajón, a box-shaped percussion instrument from Peru, is the most widely used Afro-Peruvian musical instrument since the late 16th century. Enslaved workers of West and Central African origin in the Americas are considered to be the source of the cajón drum. The cajón was developed during the periods of slavery in coastal Peru. The instrument reached a peak in popularity by 1850, and by the end of the 19th century cajón players were experimenting with the design of the instrument. After slavery the cajón was spread to a much larger audience including the Criollo community.

In 2020, Gino will be working with Diana Andrea Soto Teixeira of Santa Clarita, a graduate student at CalArts’ MFA program in African Music and Dance, and fellow Lima, Peru native. Diana is a singer and percussionist committed to the preservation and diffusion of the music of the African Diaspora in Peru. During the Apprenticeship, Gino will mentor Diana in expanding her repertoire and furthering her technique, including singing traditional songs while playing the cajón.