The Dumna people, who originally lived in the area that is now Fresno and Madera counties, are related to the surrounding Monache tribes.  In 2002, the Dumna Cultural Preservation Association used support from ACTA’s Traditional Arts Development Program to plan and implement a Dumna Tribal Coming Out Ceremony, which was the first public ceremony to be practiced by the Dumna for over five decades.  The gathering provided an opportunity to teach Dumna descendents the history, ceremonies, and dances of their people.

Tribal elder and project director Norma Behill Turner said of the ceremony, “Some of our people did not know what tribe of Indian they were.  I, with my strong up-bringing, knew who we were.  Our tribe is getting bigger through research and meetings.  Our gathering was very good.  People talked about who was related to whom.  The gathering was a ‘coming out gathering’ to let the people know we are back – the Dumna (Wo-wah) tribe of Chiqiloo (Table Mountain area).” 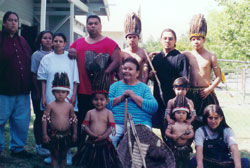