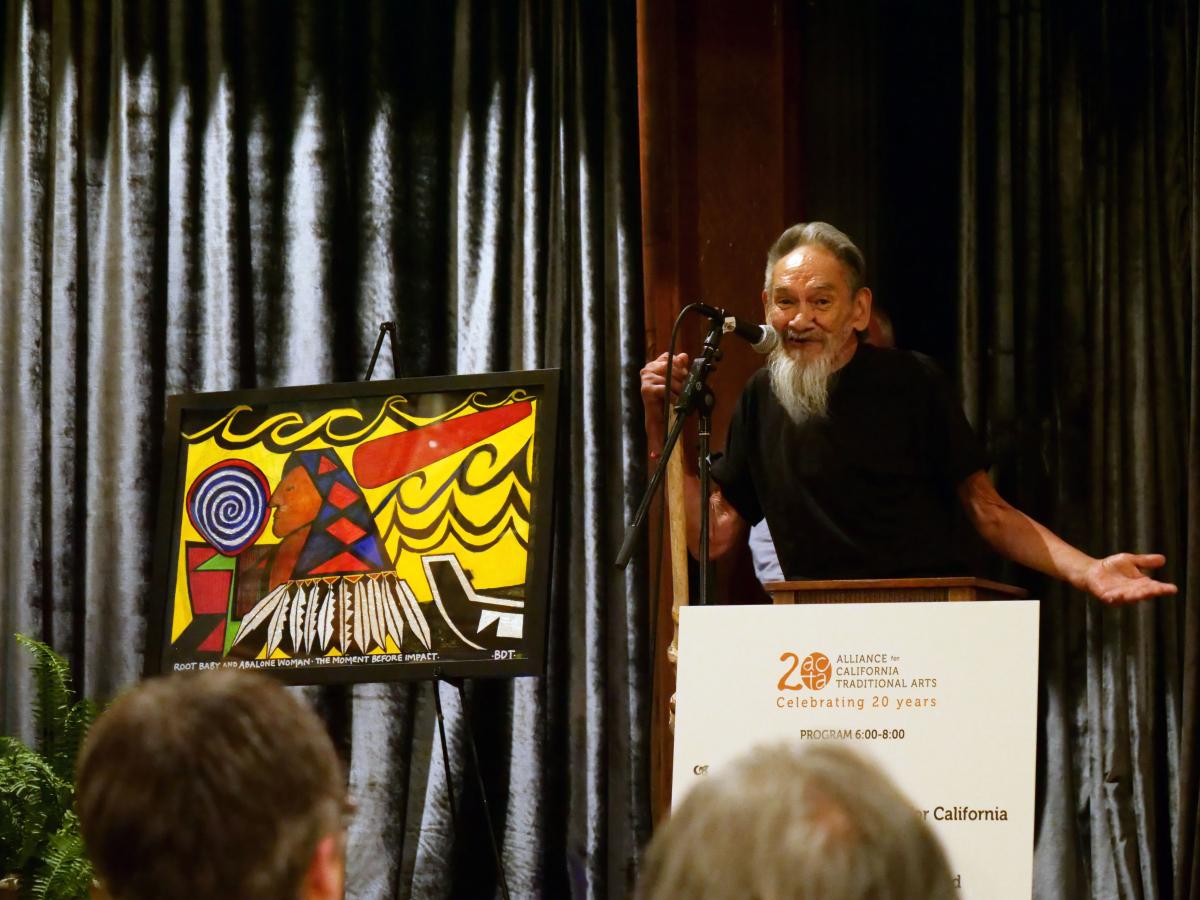 On October 4, 2018, ACTA had the honor of recognizing one of Native California’s most prolific and beloved artists: Brian D. Tripp (Karuk). Brian is a visual artist, a poet, a ceremonial singer and dancer, a regalia maker, and a pillar in the indigenous community of Humboldt County. He has committed decades of his life to revitalizing ceremonial life in the Klamath River region, helping usher in a new era of artistic engagement in local indigenous culture. As the recipient of the third-ever California Living Heritage Award, Brian represents the dedication, vision, and courage that allows California’s cultural traditions to thrive for generations.

“His voice, imagery, and passion brought to a larger audience the depth, the breadth, the vision and resiliency of Klamath River tribal traditions and ceremonial life, so important to the identity of Klamath River tribal peoples,” said artist and longtime friend of Brian’s, Frank Tuttle (Yuki-Wailaki/Concow Maidu). “Presentations of his work have for years served as inspiration for other Californian tribal peoples.”

Tripp has influenced and mentored artists across the state and helped change the landscape of how we view California Indians: in print, in art, and in the spoken word. His greatest gift to his community has been the way in which he has impacted many generations of Californians, giving everyone permission to believe that they could be a singer or a dancer or poet—that they too could carry on their cultural traditions and be an artist. He has made it possible for young, emerging California Indian artists to be proud of their cultural traditions and to be Indian without apology. ACTA honors Brian Tripp for the caliber of his artwork, his commitment to his traditional art practice, and for uplifting his community by transmitting knowledge, values, skills from generation to generation.

“Here, in the true north of the state, has been the center of cultural revolution to affirm and repair the traumas of genocide,” said ACTA Executive Director Amy Kitchener. “The transformative cultural and artistic leadership of Brian D. Tripp and many of his peers have created new norms and opportunities for the next generation. This place, and the culture-bearers working here, for ACTA have been a guiding force, a north star of traditional arts and living cultural heritage, where we can witness the power of community knowledge, aesthetics, and meaning in action.”

Click through for more stories, photos, and videos about Brian, his work, and his life in Humboldt County.

Visit our Facebook page for photos from the award ceremony.

Award coverage in the North Coast Journal: ‘I am These People.’ Artist Brian D. Tripp and the land of the fix-the-world people