If you talk to the millenial generation of lion dancers many will tell you how pretty their lions look, how light they are, how flashy, how playful. But if you talk to older performers they will tell you about a time when lions were fierce, when skilled dancers maneuvered the heavy heads as a test of their mettle and a show of the skill that took years to hone. They will tell you of a time when lion head manufacturing was not an assembly-line, cranking out generic products for a quick sale, but an art undertaken by only a few crasftsmen who put care and thought into every element and each step in the process was not a race against time but a step toward a true work of art. A time when even the colors and patterns on a lion told a story about the lion and the school that owned it.

I grew up in between the generations so while I had a taste of the old lions I was lured by the call of the “new is better” mantra. After a while I began to noice the lions just didn’t have the same feeling anymore as if some of their depth was missing. I started waxing nostalgic for the old lions with their intricate decorations. I started looking for lions that had the same sense of majesty and power. I finally began to appreciate the artistry of the traditional lions and wanted to keep the traditions that created them alive.

For a period of time there were trade restrictions with mainland China so lion dance groups turned to Hong Kong for their equipment and a few craftsmen stood out as high-quality lion makers. Among these was Lo An Kee (Pinyin: Luo An Ji, traditional Chinese: 羅安記). According to my mentor, Corey Chan, “For lovers of this style—it’s all in the eyes. A large forehead, very ornate double layer gills with 3D spheres, an enormous horn and many fins for ball attachment also distinguish the Luo An style lion.” He used standard painting patterns of the time, but instead of simply painting patterns on top of color swatches he took time to layer and blend colors together adding sometimes subtle shadowing and highlighting to really make the designs stand apart from other makers.

A few years ago two lions of his came into my possession. Although they were in fairly bad shape I held onto them hoping one day they could be restored to their former glory. Thanks to this grant from the Alliance for California Traditional Arts and some extensive mentoring sessions with Corey this dream is starting to come closer to reality. 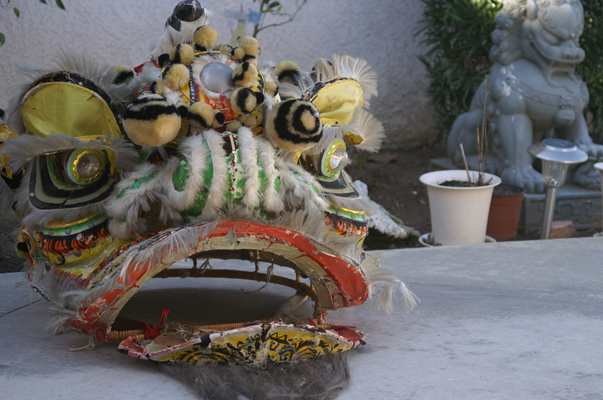 This is what the lion looked like when I received it. His eyelids were sagging, the papier mache skin was deteriorated in several places, the fur was matted and dirty and the “hero balls” (pompoms) were faded and misshappen. Inside there was framework damage and loose joints. 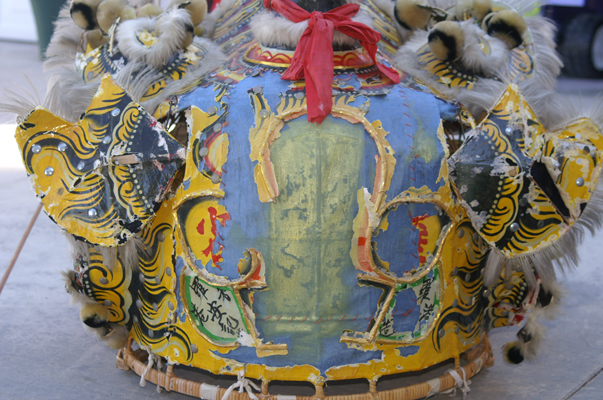 The paper and painting had almost totally fallen off of his back. 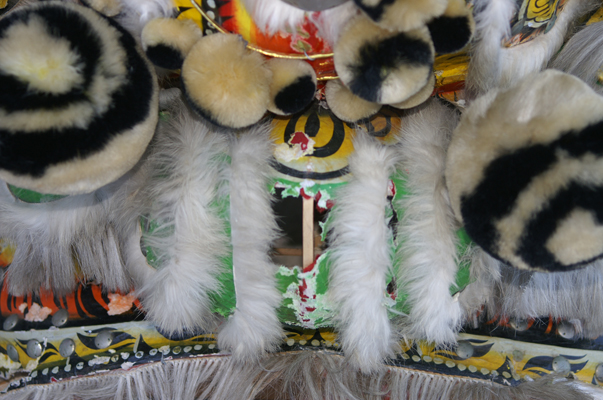 As seen here there were several holes poked through the paper skin. 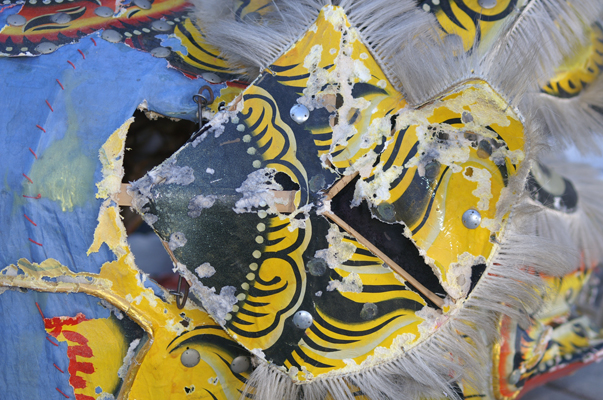 The blue silk underlayer is hiding a broken bamboo strip on the framework. More damage to the paper and bamboo are evident on the ear. 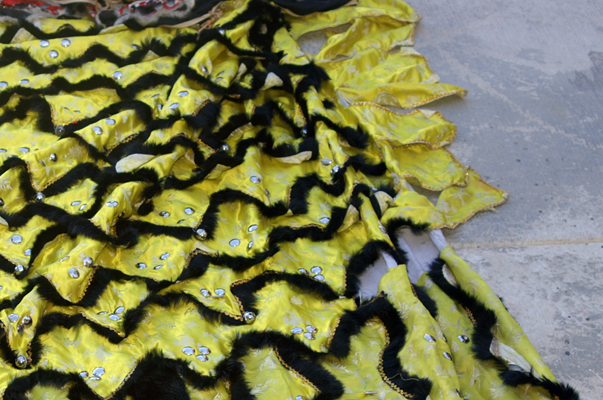 The tail had several tears and holes, as did the collar. The name of the group that used to own this lion is written in Chinese characters on the collar. I’m trying to find out more about this group to gain a more complete history of this lion as well as the lion dance scene of Los Angeles in the early 1980s. I would appreciate it if anyone with more information about this group would contact me to chat, thanks! 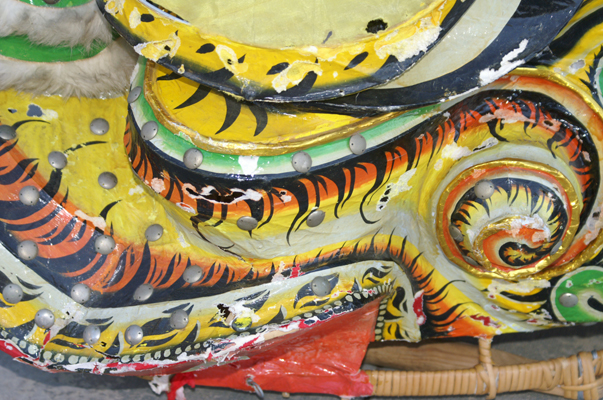 Here is a shot of some of the painting details on the side of the lion. Notice the blend from orange to yellow and to the light yellow. Tiger stripes and grass patterns are also seen here as well as a few broadsword strokes. 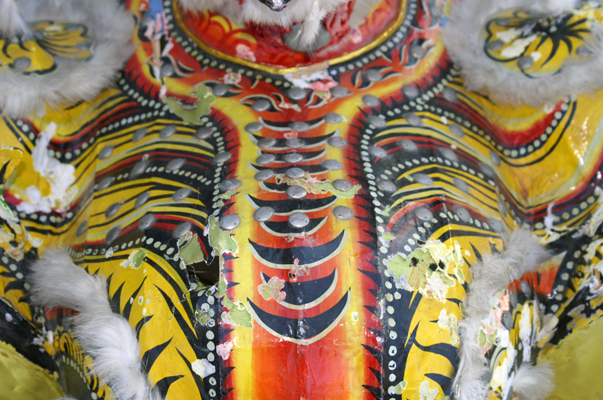 The blends are more easily seen in this shot of the top of the lion’s head. Notice also the plentiful use of the metallic discs. 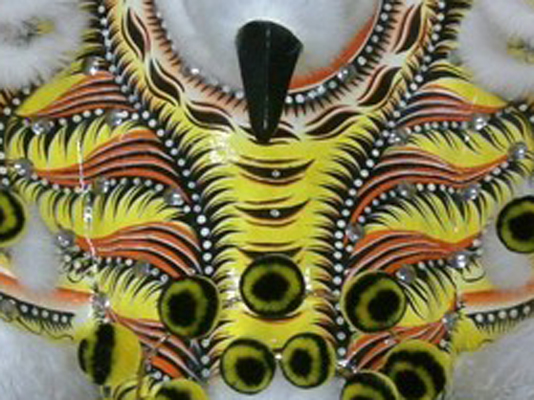 Lo An’s style is often imitated even today, but as you can see from this modern example the copies just don’t have the same “oomph” as the original. Notice the very limited use of the metallic discs, non-existant background blends and just an overall “flat” feeling of the paint job on this lion even though it follows the same basic pattern and style of painting.

It is my hope that through this internship and this blog that some of that tradition is preserved and passed on.