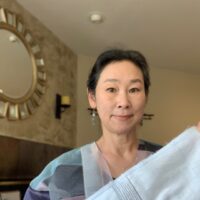 Bojagi has allowed me to have opportunities to share my native culture and arts with not only the next generation of Korean Americans, but also people with many different cultural backgrounds.”

Youngmin Lee learned bojagi in college, when she took two semesters of Korean costume history and Korean textile art tradition. From then on, she has researched more and actively worked on preserving the bojagi tradition, which embodies the philosophy of recycling and up-cycling, as the works are made from pieces of fabric leftover from other projects. In traditional Korean society, bojagi works were created by women and handed down from mothers to daughters. Consequently, they are very meaningful in tracing women’s lives in the past and the present. The tradition has influenced Lee greatly; she plans to keep and pass down the art to the next generation and to her creative community, including as a bridge between cultures.

Lee will guide apprentice Mariah Lyn Bintliff in creating a series of Bojagi projects (which will vary in technique, style, and meaning) and share knowledge on Korean culture as it relates to the work. Bintliff will document the one-on-one apprenticeship time, as well as her independent practice of the material, with an end-goal of creating a video about Lee’s creative process, their collaboration, and what Bintliff has learned during the apprenticeship.