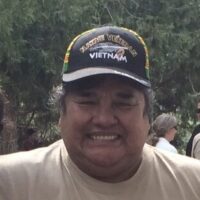 Marvin Marine (Mountain Maidu) of Sonora, CA, was taught to dance and sing by my grandmother and older men in his community. In traveling to Big Time celebrations throughout his life, he played handgames against other Maidu, Miwok, and Paiute teams from other areas, learning the specific handgame songs along the way. In his community there are specific songs that are ceremonial, celebratory, for public events, and specifically for handgames. Handgames are social “gambling” games played throughout the Native people of North America. The games include hiding bones, distracting the other team, guessing, and exchanging points or bets. Songs are sung by the hiding team while the other tries to find the “hidden” or “marked” bone. A good song can take you through to a quick win!

Marvin has been singing for more than 70 years, and his knowledge of songs has been learned and handed down from Maidu elders and relatives through play and exposure. In additional to singing, history, genealogy and folklore are all parts of the songs used in handgames. According to Marvin, “you didn’t want to sing the same song as another team (amongst your same tribe or family) so you needed your own set of songs. You learned their songs along the way, or maybe someone thought you were a good singer and gifted you one of their songs. Songs come and go with people and unless you think about them or keep singing them, they get forgotten. Songs from tape recordings is good but you may not know the history of the people who sang them, but then some are just made up for fun. Getting together and singing and laughing and betting, seeing old friends, and new family additions, sharing meals and drinks, it’s a good way to stay active and to keep doing what I like, to sing and be Indian.” 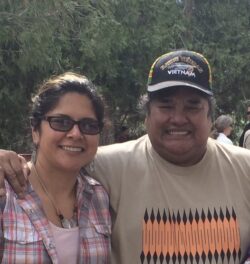 Marvin will work with his daughter Mandy Macias (Mountain Maidu) on handgame songs of the Maidu tradition, using Marvin’s archive recordings and photos to prompt his memories of people, songs and events related to handgame play and songs. The pair also plans to make two full sets of game pieces, which include four palm-sized bones (two plain and two marked) and ten point markers or sticks, using deer bones and matching point sticks. Mandy was a 2012 ACTA mentor artist in tumpline weaving with her sister and apprentice Carly Tex, and a 2016 ACTA apprentice is Western Mono beadwork with her mother, mentor artist Julie Dick-Tex.