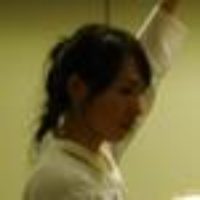 Pungmul is a Korean folk music tradition that includes drumming, dancing, and singing.  Most performances are outside, with dozens of players, all in constant motion.  Pungmul is rooted in collective farming culture.  It was originally played as part of farm work, on rural holidays, at other village community-building events, and in shamanistic rituals.  Today it has expanded in meaning and is also used in political protest and as a performing art form.  Drumming is the central element of pungmul.  Each group is led by a kkwaenggwari (small handheld gong) player, and includes at least one person playing janggu (hourglass drum), buk (barrel drum), and jing (gong). Wind instruments (t’aepyongso, also known as hojeok, senap, or nalari, and nabal) sometimes play along with the drummers.  Following the drummers are dancers, who often play the sogo (a tiny drum that makes almost no sound) and tend to have more elaborate—even acrobatic—choreography.  Finally, japsaek (actors) dressed as caricatures of traditional village roles wander around to engage spectators, blurring the boundary between performers and audience.  Minyo (folksongs) and chants are sometimes included in pungmul, and audience members enthusiastically sing and dance along.

Dohee Lee has studied and peformed traditional Korean music and dance since the age of 15.  She studied traditional Korean dance at the Suwon Women’s College and folk and court music at the Yongin University under the instruction of numerous masters including Maebang Lee, Sooyoung Lee, Jinsung Yang, Jiwha Ryu, Jungoo Kim, Sukgun Kil, Kwangja Kim, and Kyungwoo Baek.  She is currently the Artistic Director of Oakland’s Korean Youth Cultural Center.

In 2009, Dohee participated in ACTA’s Apprenticeship Program with apprentice Kyungseok Kent Hong.  The apprenticeship focused on techniques and various textures of several pungmul instruments, including the janggu and the kkwaenggwari, and Kent was trained to adapt to various situations and roles within a pungmul ensemble. 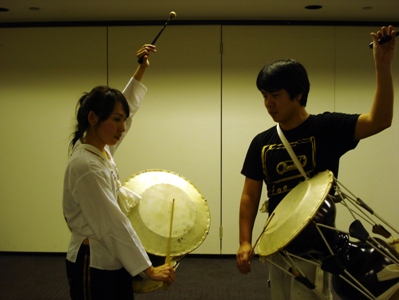 In 2009, master artist Dohee Lee (Oakland) participated in ACTA's Apprenticeship Program with p’ungmul apprentice Kyungseok Kent Hong (Berkeley).  The apprenticeship focused on techniques and various textures of several p’ungmul instruments, including the janggu and the kkwaenggwari, and Hong was trained to adapt to various situations and roles within a p’ungmul ensemble.

Rooted in Korean farming culture, p’ungmul is a Korean folk music tradition that includes drumming, dancing and singing.  Most performances occur outdoors, with tens of players all in constant motion.  Originally played as a part of farm work, during rural holidays and other village community-building events and shamanistic rituals, p’ungmul today has expanded in meaning and is used in political protest, as a performing art form, and as expression of Korean cultural heritage and pride amongst first, second and 1.5 generation Korean-Americans.

Drumming is a key element to p’ungmul.  While apprentice Hong focused on several instruments and techniques during his apprenticeship with Lee, their primary focus was for him to deepen his playing of the janggo (hourglass drum), and how to play it while dancing dynamically.  The janggo is secured to the body with a simple cotton sash, wound across the torso, through the drum and bound at the back.

Lee and Hong frequently conducted their p’ungmul apprenticeship at the Oakland Asian Cultural Center, a bustling community space located in the heart of Oakland Chinatown.  In addition to focusing on the janggo together, Lee imparted to Hong techniques and practice in playing the role of sangswe (percussive leader) in a p’ungmul troupe, deepening his understanding of the feel, quality and timbre of various p’ungmul rhythm and instrumentation.

Frequently during the apprenticeship, Hong would practice as the sangmo, a key role in a p’ungmul group who wears a special hat with a long ribbon.  The sangmo must rotate his or her head precisely in range and rhythm to animate the ribbon while drumming and dancing.

These one-on-one apprenticeship lessons, separate from rehearsals and practices that traditionally bring community members to play together, allowed Lee to monitor Hong’s process and technique closely.  Hong notes: “I have reached a point where self-study and practice cannot propel me any further, and I look to Lee for higher education to allow me to grow as an artist and eventually as a teacher.”

Dohee Lee has studied and performed traditional Korean music and dance since the age of 15.  She studied traditional Korean dance at the Suwon Women’s College and folk and court music at the Yongin University under the instruction of numerous masters including Intangible Treasure Maebang Lee, Sooyoung Lee, Jinsung Yang, Jiwha Ryu, Jungoo Kim, Sukgun Kil, Kwangja Kim, and Kyungwoo Baek.  She is currently the Artistic Director of Oakland’s Korean Youth Cultural Center.

“I cannot identify myself without this art form and knowing this value of culture,” Lee reflects. “I have a mission to educate people to learn this art and tell the history, community and identity [of the form], especially here in the U.S.”

Lee’s leadership in the San Francisco Bay Area as a p’ungmul teacher, in addition to her practice as a tradition-based and experimental choreographer, dancer and vocalist has allowed her to work with various Korean and Korean-American community groups and a diverse array of artists including Kronos Quartet, Anna Halprin, Shinichi Iova-Koga’s inkBoat, Tatsu Aoki, Frances Wong, and KUNST-STOFF.

Trained in Western classical music and specializing in violin, 1.5 generation Korean-American Hong realized that “p’ungmul was more than just a musical phase.” Hong first met Lee in 2002 while playing in UC Berkeley’s student p’ungmul group Ego, a group which he ultimately led as sangswe. As his practice developed in past years, he has joined in performances at the Korean Youth Cultural Center where Lee is the Artistic Director, and at annual festivals and performances.

Hong intends to deepen his study in p’ungmul through pursuing a graduate degree in ethnomusicology in 2010, focusing on Korean music, with hopes to promote, advocate and represent Korean music outside of Korea.

While p’ungmul traditionally is orally transmitted, Lee and Hong’s apprenticeship combined both oral transmission and written form.  Hong’s musical background allowed him to capture the songs and rhythms in score format, while Lee and Hong also tried to utilize Korean court-based changam-bo scoring methods which are hundreds of years old, and now used to notate classical and folk music forms.