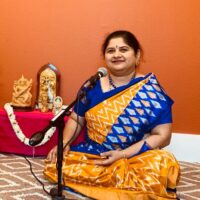 When she was five years old, Divya Ramesh learned Carnatic vocal music from her aunt, a renowned musician in Bengaluru, India, and her mother, who conducted Bhajana Mandali (social groups who sing Bhajans, a form of devotional compositions) at their home. These Bhajana Mandalis constantly inspired Ramesh to learn more and hone her craft. The turning point in Ramesh’s musical career was when she released a CD, Bhakthi Sammilana, in 2009, and met her Guru (Teacher), Karnataka Kalashree Vid. Tirumale Srinivas, who has tuned more than 300 Haridasa compositions. With the support of both her mother and Srinivas, Ramesh was inspired to conduct further research and spread awareness on the topic of Dasa Sahityas. Since 2011, Ramesh has taught these compositions to many rasikas (art lovers) and music enthusiasts, bringing them together through their passion for musical knowledge and growth.

The goal of this apprenticeship is for Sanviti Amarnath to learn, refine, and perform Dasa Sahitya compositions through a traditional Carnatic style, as well as to familiarize with the histories of the compositions and their composers. Amarnath will then showcase her creativity and understanding of the Carnatic by presenting her learned pieces, their meanings, and the biographies of their composers to the music community in a traditional setting.