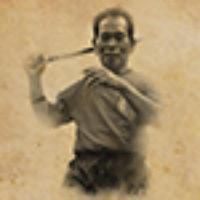 Crispulo Atillo is a Grandmaster of eskrima, a non-aggressive, weapons-based martial art rooted in Filipino history and culture. Great Grandmaster Atillo began studying eskrima as a teenager with his father and with Great Grandmaster Teodoro Saavedra. He was a master artist in ACTA’s Apprenticeship Program in 2006 with apprentice, Red Dagum.

Crispulo Atillo was 14 years old when he began his formal training in 1952 under arnis legend Venancio “Anciong” Bacon, but his first fighting experience came at a much younger age. During the Japanese occupation of the Philippines in the early 1940s, Crispulo Atillo’s father was a member of the resistance, and more than once both father and son narrowly avoided capture. It was also during these war years that he witnessed Venancio Bacon and another legendary balintawak master, Teodoro Saavedra, fight in challenge matches.