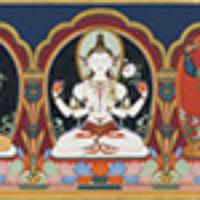 Thangkas are spiritual paintings of Buddhist deities and iconography.  The images are used for meditation practice and are typically found on murals or individual paintings covering temple walls and within the home meditation room of Buddhist practitioners.

In modern times, the paintings are made using gouache, watercolor, sumi ink, and gold.  The process is slow as the painter must focus their mind and breath with every brushstroke.  Buddhist lamas then determine the spiritual value of the painting by the intricate line work which reflects the state of mind of those who created it.  After the painting is completed, a lama blesses and awakens it.

Ang Tsherin Sherpa started studying thangka painting at the age of 12 under the guidance of his father, Master Urgen Dorje, a renowned thangka painter with a career spanning more than 55 years.  During his formal training in Kathmandu, Nepal, Tsherin worked alongside his father to paint four different monastery murals, each containing between 200 and 500 images of deities.

Of thangka painting, Tsherin says, “[It] is not an art form for me… it is spiritual practice.  The whole process of painting is a meditation practice through which one develops not only one’s artistic skill but also spiritual growth.  Even the painting itself is used for meditation.”

Tsherin participated in ACTA’s Apprenticeship Program in 2010 with apprentice Paul Ferguson.  During the apprenticeship, Tsherin led Paul towards painting several manifestations of the deity Tara; Paul dove deeper into the intricacies of detail work and inner symbolism in the paintings.