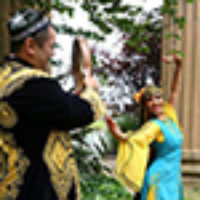 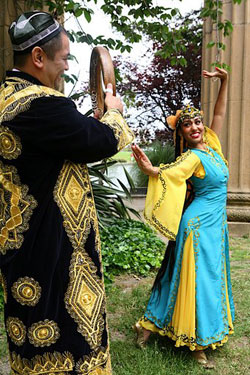 The doira is a frame drum with brass rings that is used to accompany both popular and classical music from Iran, the Balkans, and many Central Asian countries such as Tajikistan, East Turkestan, and Uzbekistan.  The doira is regarded as one of the most ancient percussive instruments from Central Asia and it was originally played only by women during shamanic rituals.  In Uzbekistan, the doira is supported as a national art and it can be heard at most festivities, rites of passage, seasonal celebrations, and religious ceremonies.  This instrument in particular has always been an essential staple and inseparable element of traditional Uzbek dance because its specific rhythm patterns serve not only as a foundation for Uzbek dance vocabulary and they also play an integral role in expressing storytelling within choreography.

Abbos Kosimov trained from age ten with Ustad Tuychi Inagomov, one of the few honored artists who have been officially recognized by the Uzbek head of state.  Bearing the same illustrious title, Abbos arrived to the United States in 2005 having performed alongside artists including Zakir Hussain, Giovanni Hidalgo, Simon Shaheen, and Hassan Hakmoun at the World Music Institute.  Of the doira, Abbos says, “Uzbek culture and national identity is deeply rooted in its music and dance traditions.  As such, doira paired with dance has grown with the country over time and evolved to play a deeper role in reflecting Uzbek history, religion, heritage, and cultural traditions… Doira is my life and I cannot live without it.”

Abbos participated in ACTA’s Apprenticeship Program in 2009 with apprentice Tara Catherine Pandeya.  Their apprenticeship focused on doira rhythms, reinforcing the connection between Uzbek percussion and dance, and allowed Tara to develop proficiency in interpreting doira rhythms and understanding Uzbek music composition and improvisation. 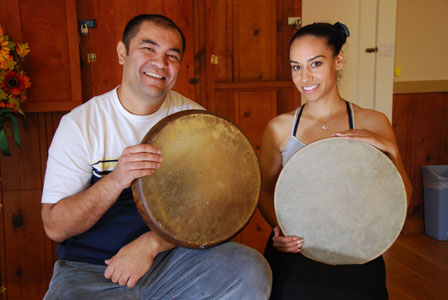