Join us for Sounds of California in San Francisco’s Bayview on Sunday, April. 29 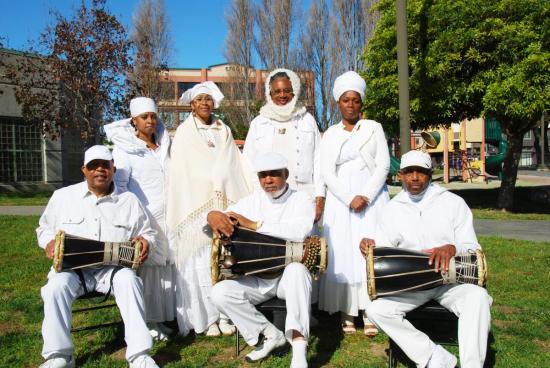 The Alliance for California Traditional Arts (ACTA) invites you to a lively afternoon of music and conversations from the San Francisco Bay Area’s African-American, Vietnamese, Kurdish, and Chicano communities. The event begins at 2pm on Sunday, April 29 at the historic Bayview Opera House in San Francisco’s Bayview-Hunter’s Point neighborhood. The musicians’ songs and stories reflect their histories of displacement, migration, and creating a new sense of home.

The program is hosted by San Francisco’s own Rhodessa Jones, co-artistic director of the acclaimed San Francisco theater company Cultural Odyssey and recipient of the prestigious U.S. Artist Fellowship.

The musical groups include:

Omnira Institute creates connections between the African-American experience and African spirituality through their sacred drumming and chants. The group’s Awon Omnira Choir preserves West African musical traditions that have carried on for generations. They also bring their music to sites of police violence to support grieving communities who have lost young men of color. Click here for a music sample.

Özden Öztoprak and Isik Berfin are a mother-daughter duo from Turkey’s ethnic minority Kurdish-Alevi community, which has historically suffered persecution. Their distinct Kurdish repertoire of songs stem from a Sufi spiritual tradition that has passed down behind closed doors, from Özden’s grandparents to 21-year-old Berfin. They exemplify how immigration to California allowed for their voices to openly be heard. Click here for a music sample.

La Familia Peña-Govea is a family of musicians who perform traditional Mexican songs with an activist Chicano perspective. Parents Miguel Govea and Susan Peña raised their two daughters Cecilia and Rene in a household of music and activism in San Francisco’s Mission District, historically a hub of Latino culture. Their music reflects evolving Latino identities and the changing cultural landscape of California. Click here for a music sample.

“People do not forget where they are from. Language, song, or story can be the connecting thread,” says Lily Kharrazi, Program Manager at the Alliance for California Traditional Arts. “That is what the Sounds of California program is all about. We are proud to have complex identities expressed through song,” she adds.

To RSVP, visit the Facebook event page or Eventbrite page.

The Sounds of California initiative is an ongoing partnership between the Alliance for California Traditional Arts (ACTA), Radio Bilingüe, and the Smithsonian Center for Folklife and Cultural Heritage to explore how experiences of immigration are embedded and archived within music, sound, and social practice across our state. Through this project, we are creating a new public collection of music recordings that document the histories and cultures of California’s communities.