The 2019 cycle of ACTA’s Apprenticeship Program, which awarded 17 apprenticeships throughout the state, is nearly wrapped! The Apprenticeship award supports a period of concentrated, one-on-one learning between artists who are masters in their forms and qualified apprentices who have demonstrated a committed engagement with, and a talent for, a specific traditional art form or cultural practice.

As part of the Apprenticeship Program, ACTA staff members visit each and every artist pair. The fieldwork-based site visits for 2019 began in May; over these last several months, Apprenticeship Program Manager Jennifer Joy Jameson, Living Cultures Grants Program Manager Julián Antonio Carrillo, Digital Media Specialist Shweta Saraswat, and Executive Director Amy Kitchener have visited artists from San Diego County to the Central Valley to the Bay Area to Humboldt County in the far north of California.

ACTA staff members cherish these mid-point site visits as an opportunity to learn about the impact of the Apprenticeship program firsthand. Artists open up their homes and studios to us and share with us the intimate process of one-on-one learning. During a site visit, we spend quality time with the artists, offer an affirming word, and answer any questions they may have about the Apprenticeship process. We observe and document their work in-process, often witnessing the nuance and intricacies of pedagogy and transmission between master/mentoring artist and apprentice. We also have the pleasure of video recording an interview with them, touching on key questions of histories, aesthetics, transmission, and the future of these art forms in California. More than anything, we seek to listen and learn, meeting the artists where they are, offering any support they need, and building lasting trust and rapport.

Just a few of the highlights from this year’s site visits include:

Master textile artist Youngmin Lee of Pleasanton (outside of Oakland) mentored Stephanie Rue of Sacramento in an apprenticeship focused on Korean bojagi textiles. Bojagi are traditional, handmade wrapping cloths often resembling pieced quilt tops, but coming from a distinct Korean cultural tradition. The wrapping cloths are hand-sewn with a number of particular types of stitches and often serve to wrap special occasion gifts that can be admired as an additional keepsake or wall-hanging, or then be repurposed as wrapping for another gift.

Youngmin, born in Seoul, Korea, originally studied garment history and fashion design. But after she immigrated to California, she found herself drawn more and more to the cultural textile work she observed the women in her family practicing in her youth. She has since become a well-respected source on bojagi in America, teaching regular classes and workshops around the Bay Area in the form and leading tours across Seoul that focus on Korean textile practice.

Youngmin’s apprentice, Steph, a Korean-American woman born in California, comes from a book arts and papermaking background, and is skilled in Eastern forms of paper making in particular. With new training from Youngmin, she has developed an extraordinary body of work blending these forms into bojagi textiles made of her own hand-made paper, as well as books made with bojagi stitching and piecing techniques. The pair’s culminating exhibition, From Fabric to Paper, opened at the Korean Consulate Gallery in San Francisco on September 30, 2019, and will run until January 3, 2020.

Master artist Luis Torres of Panorama City works with his son and apprentice Arthur Torres in the tradition of Bolivian and Andean music (music of the Andes region of South America). Torres, a retired LAPD officer and first-generation Angeleno born of Bolivian parents, has been studying Bolivian traditional music since the age of 11, when he was introduced to master charango player Ernesto Cavour. Luis continued to travel to Bolivia for the summers where he studied under Cavour and others to further develop his practice in the charango (a 10-stringed acoustic instrument), the zampoña (panpipe), and the tarka (woodwind instrument). Later, in Los Angeles County, he founded the Andean music ensemble KIYARUNA, which performs regularly in Southern California-based South American festivities like Bolivian Independence Day. 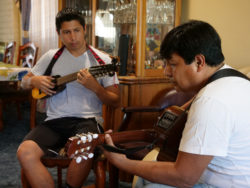 As Luis’ son, Arthur, has grown older, Luis has trained him in the basics of Andean and Bolivian music. Arthur grew up participating in Andean festivals and processions in Southern California. During their apprenticeship, Arthur has been honing his practice in the zampoña and in the fast strumming techniques (the Repique and Tremelo) of the charango. Arthur has also been deepening his understanding of the social context of this music, even learning to sing in Quechua, an indigenous language of the Andes.

Bharatanatyam dancer and teacher Soumya Tilak is training 15-year-old apprentice Vibha Raju in Bharatanatyam, a classical dance from South India. In particular, Soumya is teaching Vibha three jathiswarams, a particular piece of Bharatanatyam’s technical dance repertoire that includes long sequences of rhythmic footwork and abstract movement set to the recitation of rhythmic compositions (jathi) and the singing of musical notes (swara). According to Soumya, the practice of jathiswaram is dwindling in the diasporic Bharatanatyam field, perhaps because of the extreme level of rhythmic and physical rigor these compositions entail.

Soumya is also teaching Vibha how to notate the jathiswaram compositions using a new written notation system called Natyagraphy, developed by Soumya’s guru Dr. Vijay Madhavan in Chennai, India. Following in the tradition of Laban and Benesh notation, Natyagraphy allows the dancers to write down not only musical patterns, but also their accompanying movements through an original alphabet of lines, curves, and dots.

Soumya was born in Dubai before her family moved to Chennai to further Soumya’s dance training. She eventually settled in California in 2007 and opened her own Bharatanatyam training program while still maintaining an international career as a solo artist. Soumya specializes in the Vazhuvoor style of Bharatanatyam, a lively and lilting style of dance that is new to Vibha, who came under Soumya’s guidance in the last few years after extensive training with other teachers.

All photos by ACTA staff.