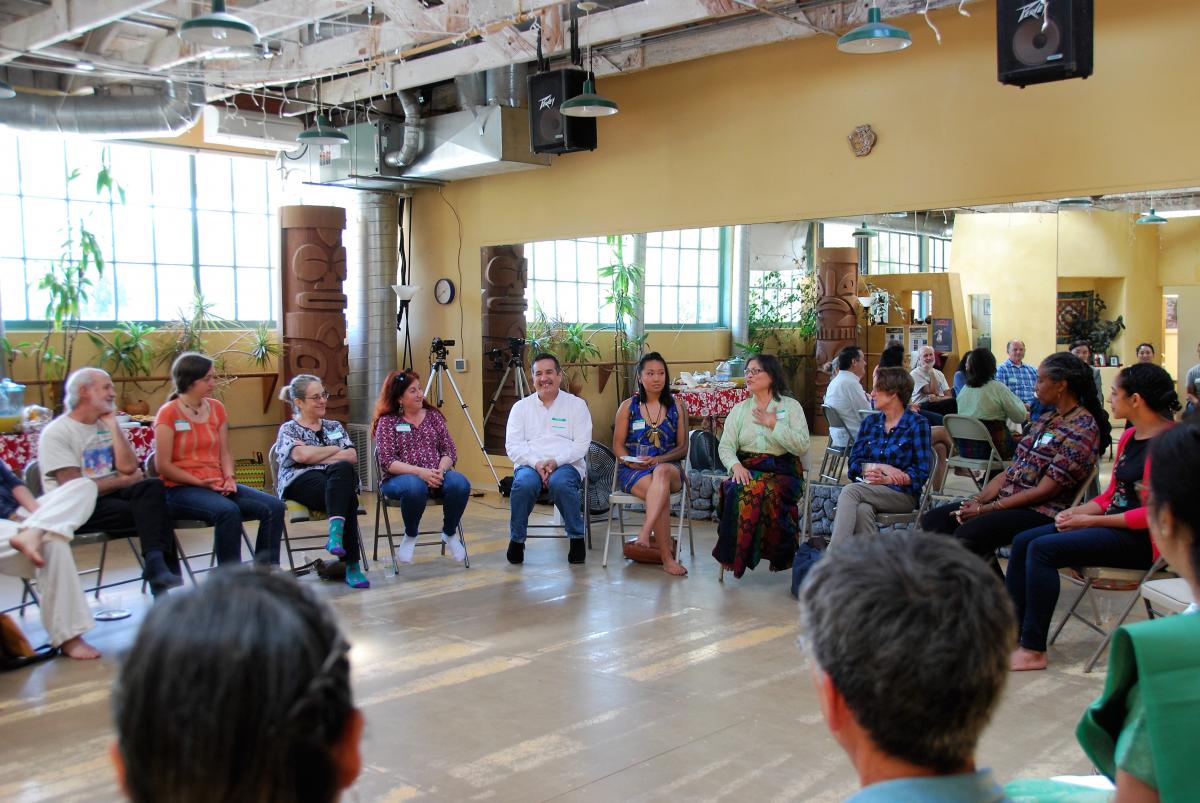 A core principle guiding ACTA’s work is to provide opportunities for artists, activists, and cultural leaders to share their arts practices, their issues or concerns, and to celebrate their differences. These gatherings occur through our free and open to the public Traditional Arts Roundtable Series throughout the state, and each spring in the Bay Area for our grantees of the Apprenticeship and Living Cultures programs. Under the auspices of the Walter and Elise Haas Fund, who are a core supporter of ACTA’s work, we invite our grantees to meet one another, share art, food, and engage in topics of discussion.  It is often at these events that seemingly disparate peoples find much in common. We have been convening annually since 2008 with new organizations and artists each year and many who we welcome back as they grow and mature into their artistic and cultural practices. 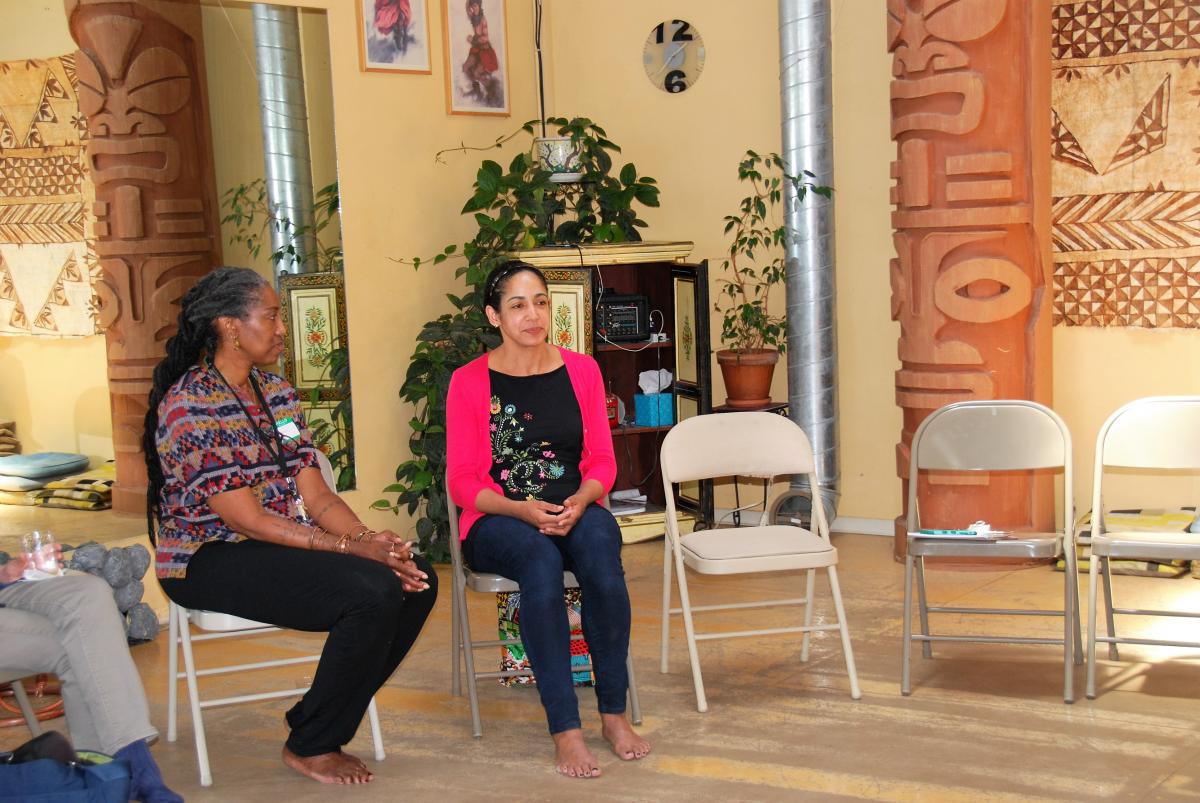 The power of cultural practices as a vehicle to transform and connect was in full effect on May 7 at our recent gathering held at the beautiful, light-filled studio of current grantee, the Mahea Uchiyama Center for International Dance in Berkeley. Striking about this year’s attendees was their deep connection to practices that span generations. Our host, Mahea Uchiyama, a respected Kumu hula, explained when asked about the venue that nearly 25 years ago she was unable to secure a loan for it as an “divorced, African-American single mother.” She financed the studio by putting it on personal credit cards and paying it off. Her acumen and risk taking in hindsight might be heralded today as entrepreneurial, and perhaps if she were in the tech sector, she would have even garnered the attention of venture capital, but as a woman of color with a dream of having her own studio, the odds were certainly not in her favor. Staring out at the culturally and artistically diverse artists who chose to join ACTA on this sunny spring day was made even more significant given the history of the Mahea Uchiyama Center for International Dance. With the rapid gentrification of the Bay Area impacting our artists and communities, the studio stands as a bright spot and victory for the practice and learning of cultural arts. 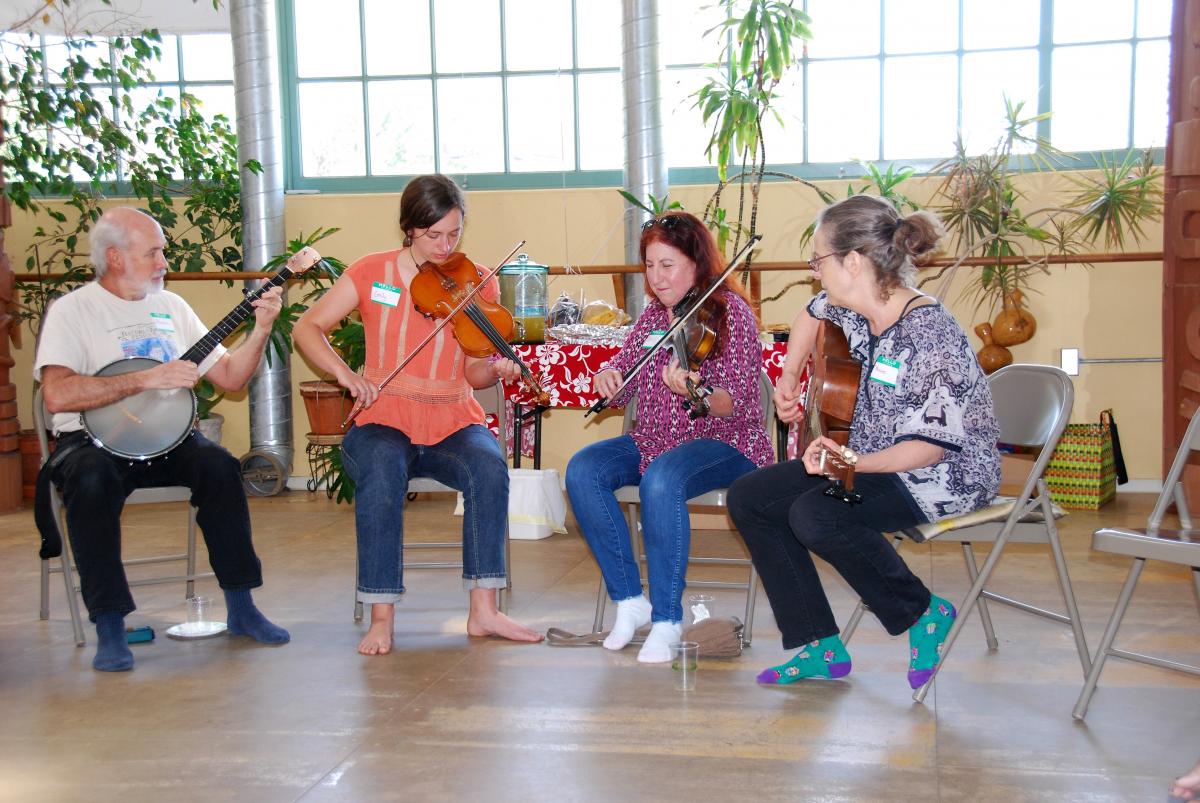 The art sharing portion of our program began with musicians from the Berkeley Old Time Music Convention, under the leadership of artist, Suzy Thompson. The East Bay has become a destination for Appalachian artists to interact with a strong community of practice. Through master classes, public jams, lectures, square dances, and concerts, the BOTMC has grown over the years under the careful stewardship of a dedicated group of musicians. Listening to Suzy Thompson, Brendon Doyle, Emily Mann, and Maxine Gerber play music so identifiable as an American genre, we were reminded that the music is the product of influences of Irish, Scottish, and English immigrants and the legacy of enslaved African-American people, as well as other settlers. The musicians who shared their craft with us value this history and each year the BOTMC has given special attention to invite those elder culture-bearers who provide context for this music. The guest Appalachian musicians who’ve participated over the years enjoyed a renewed sense of appreciation and value by performing and teaching in communities outside of their own. Relationships formed over time with musicians from California, leading to touring gigs for banjo player Brendon Doyle, though Emily Mann may be the best by-product of the BOTMC – it was as a teen at the Convention that she first discovered her passion and aptitude for this music. 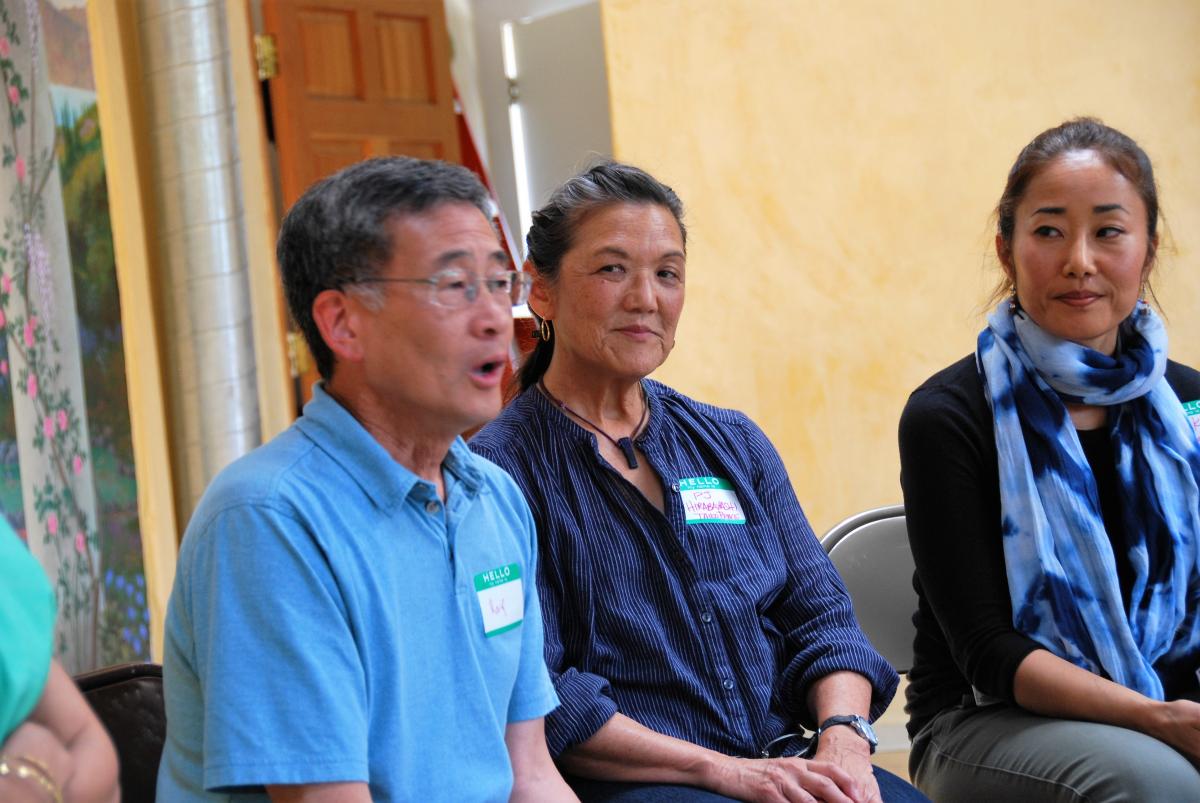 The combined experiences of our grantees of lived knowledge, commitment, and talent were deep. Roy and PJ Hirabayashi are NEA National Heritage Fellows (2011), the nation’s highest honor for traditional artists.  They were acknowledged as the founders of San Jose Taiko and for propelling the practice of taiko in America. What began as a call to explore their Japanese-American roots in the identity politics of the 70’s became inextricably linked to the social justice issues of the time and this consciousness still propels their world view. This combination of personal and community identity linked to the practice of traditional arts is a repetitive theme across ethnic lines. For our grantee gathering, Roy and his apprentice Yurika Chiba demonstrated how they are working on improvisation with the shinobue, or bamboo flute, that accompanies the drum ensemble. They improvised for us a sonorous piece, largely expressing the dynamic qualities of emotion that the flute can carry over melody lines. We are reminded again that learning in this intimate way, one-on-one, is not just about performing with competence but that exposure to master artists is accompanied by stories and guideposts that go far beyond the parameters of a lesson plan. 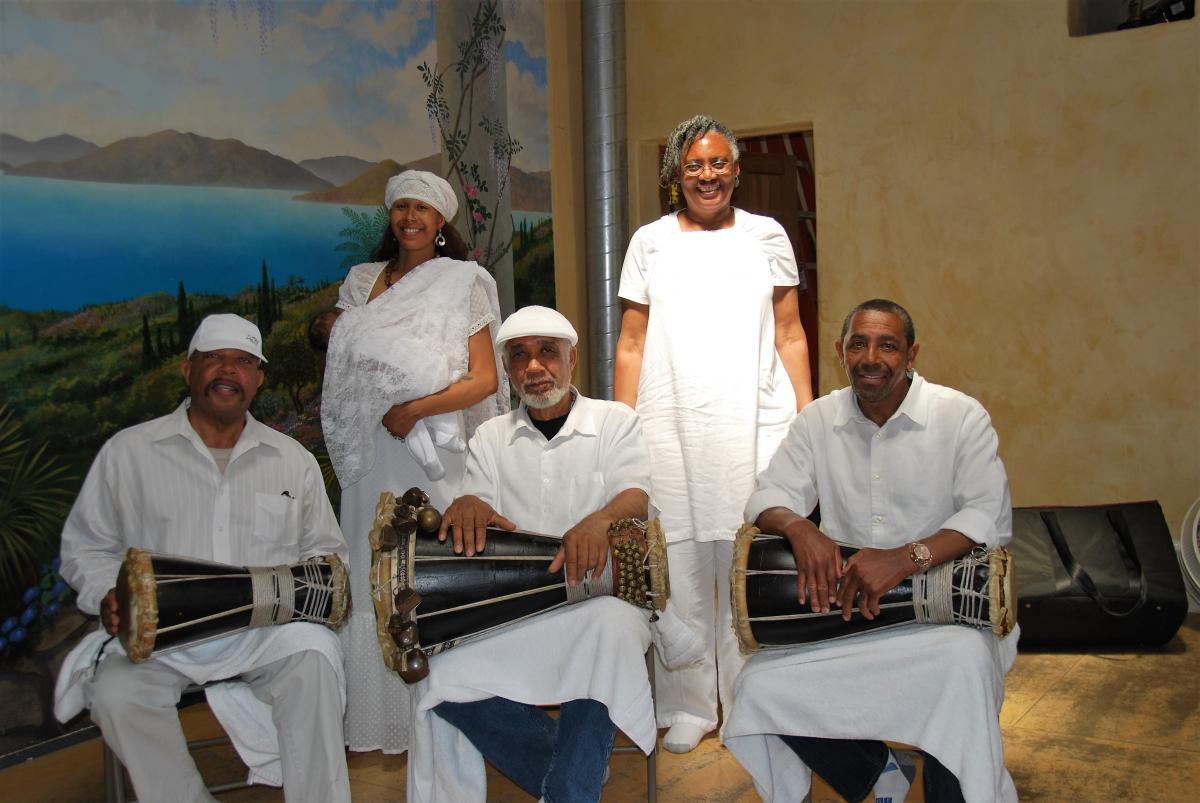 Omnira Institute’s work is based upon the principles and practices of African spirituality and connecting these roots to the African-American experience. Through public performance, lectures, gatherings and civic action, the organization is active during Black History month, Juneteenth, and organizes the Black Eyed Peas Festival. With the tragedies of deaths at the hands of police violence which has plagued men of color in Oakland and the nation, Omnira members have gone into the streets where violence has occurred to sing songs and prayers from the Lucumi tradition in an act of healing and release. The families of the deceased are often comforted by this says founder, Wanda Ravernell. Omnira’s work stands as a powerful statement of how traditional practices are located at the nexus of social action and political will. 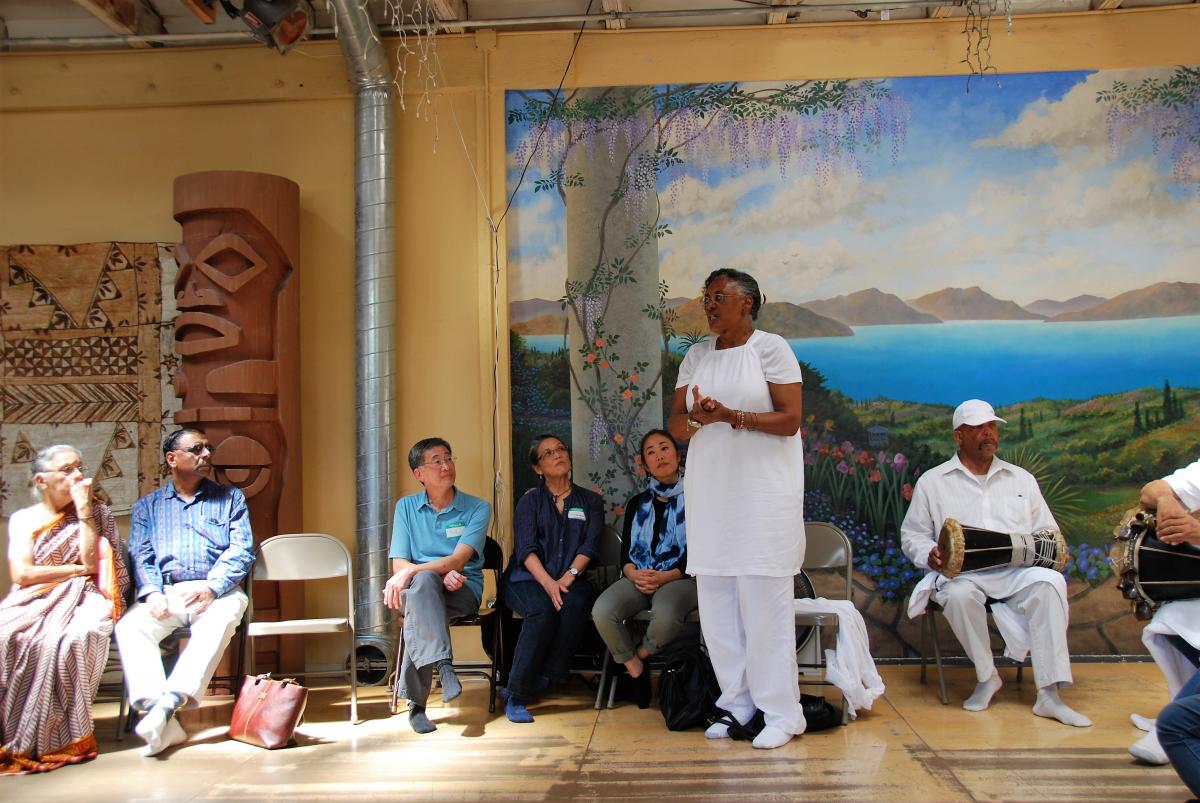 As the three drums of the bata ensemble were unwrapped from the towels and fabric that encased them and the space began to fill with the full sounds and vibrations of drum, bells and voices, we were enveloped by the invocations and praise to the orishas or Lucumi manifestations of nature and the divine. Tobaji Stewart’s apprentice Estrella Ramey, who last year worked to refine her singing, brought her newborn baby along, who was positioned behind the bata drums wrapped close to her mother’s body, much like the proximity of the drums on the laps of the drummers. 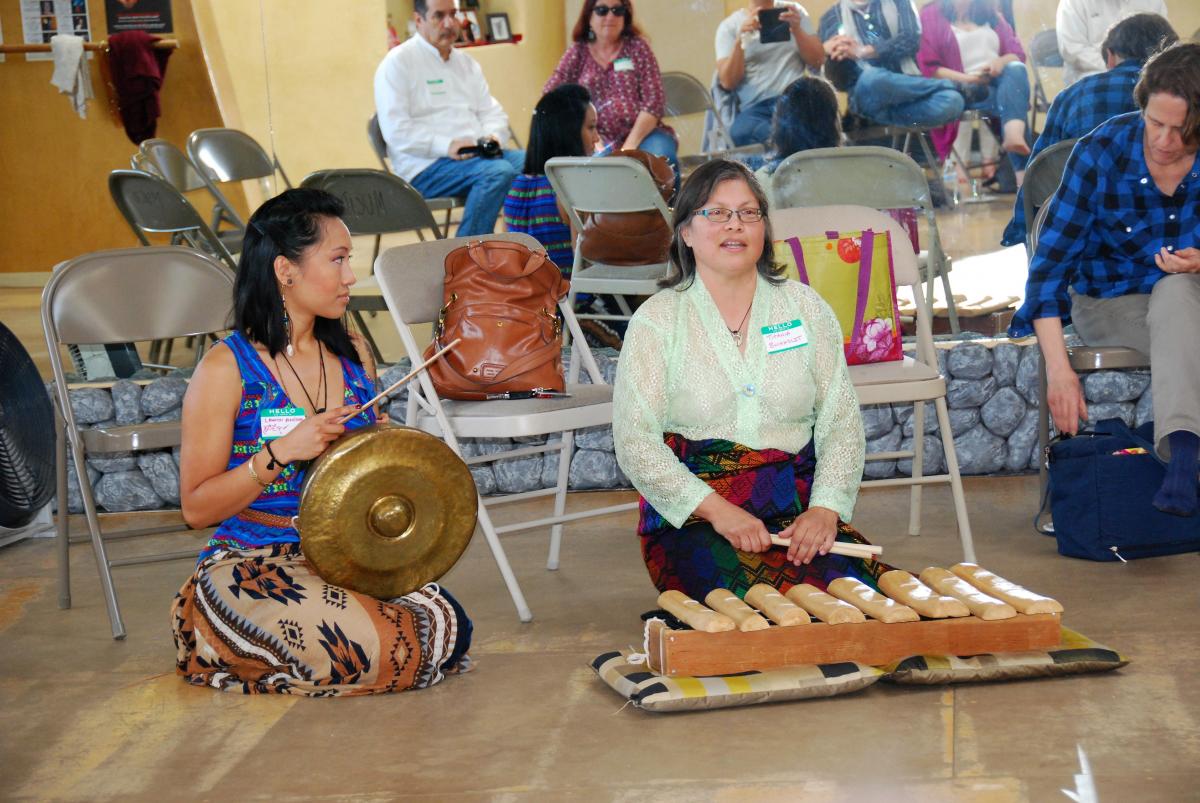 The importance of culture-bearers and their connections to ancestral links was further demonstrated by the Titania Buchholdt and her apprentice, Lauren Benetua whose work together will center upon developing skills on the various instruments of the kulintang ensemble, the indigenous music of Southern Philippines. Titania was a longtime student of the late Danongan Kalanduyan, another NEA Heritage Fellow who introduced this music to the West. Continuing his legacy are numerous dedicated students of the late master who brings a Pilipino-American sensibility to this pursuit. Inextricably tied to understanding identity and layers of history that include colonization of the Philippines by the Spanish and the Americans, the search for indigenous roots has been a tenet that has fueled artists, gaining traction among the second and third generations of Pilipino-Americans. 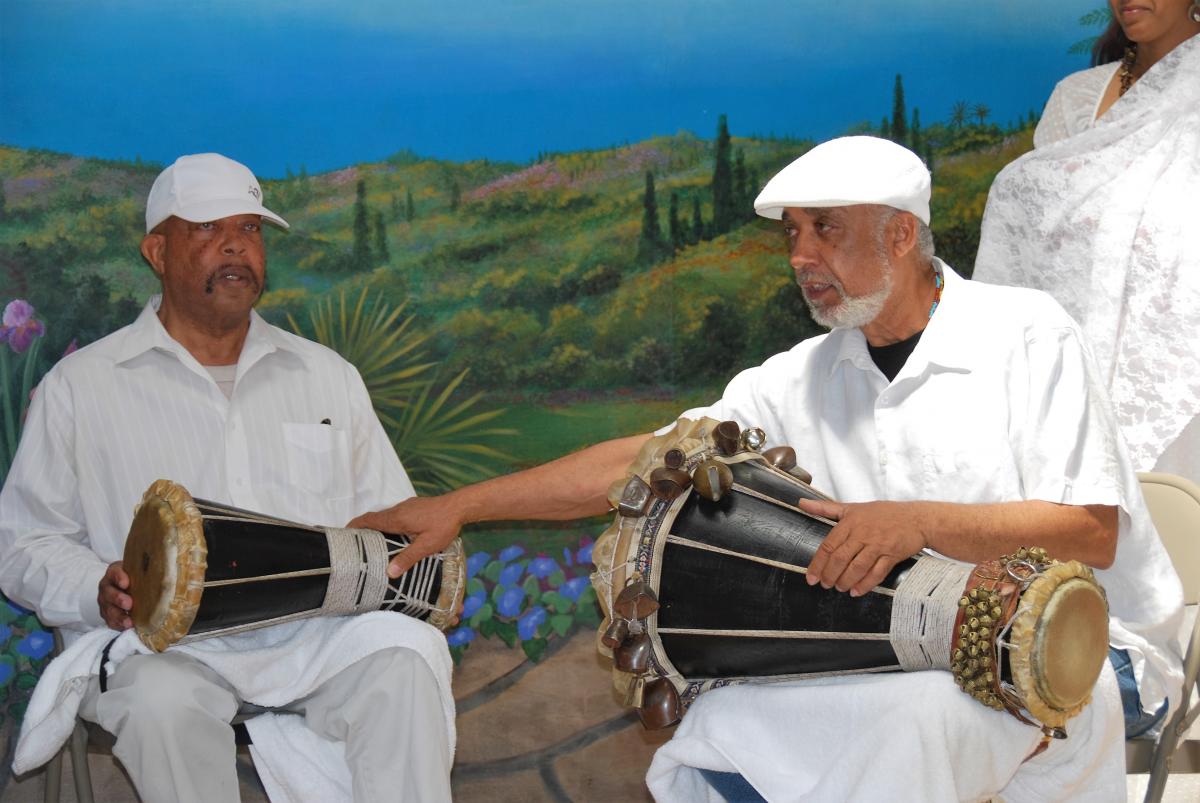 Our gathering concluded with an acknowledgement that culture-bearers and artists are lay leaders with immense authority outside of academia. ACTA program manager Russell Rodríguez encouraged the participants that even as ethnic/American studies are challenged in schools, we have agency to develop our own narratives. He encouraged artists to write, produce audio and video, and publish it for the world. This brought us back to our host, Ms. Uchiyama, who self-published a book on learning Hawaiian dance which first developed as class notes, and now has had multiple printings.

Here at ACTA, we will be creating more opportunities for our artists and culture-bearers to contribute your first person, first-voice experiences as we expand our media and technical support in the near future. Stay tuned and contact us with your ideas. The gathering may be “local” but we wish to include California’s traditional artists and culture-bearers wherever they be in our large state.