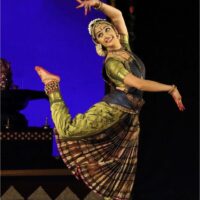 Surabhi Bharadwaj, Artistic Director of Siddhi Creative and Siddhi Dance Academy, is a seasoned Bharatanatyam dancer, teacher, and choreographer trained under eminent Gurus including – Guru K M Raman, Guru Radha Sridhar, Guru B Bhanumati, and Mavin Khoo. She learnt the Karana movements under Dr. Padma Subrahmanyam and Guru Nirupama Rajendra. Surabhi holds an MFA in Bharatanatyam from Sastra University, Thanjavur and an MFA in Dance: Design and Production from Saint Mary’s College of California. Since 2017, she has been freelancing as a dance lighting designer.

Surabhi is an Empanelled Artist of the Indian Council of Cultural Relations and is also recognized as a Graded Artist by Doordarshan (the National Broadcasting Channel of India). She has received accolades for her performances (both solo and ensemble) across India, USA, Europe, and the Middle East. She has worked as the Principal Dancer of Punyah Dance Company and Raadha Kalpa Dance Company (two leading Bharatanatyam companies in India) before moving to the USA in 2015.

Wearing multiple hats both on the creative and the management side, Surabhi has produced multidisciplinary works including ‘Ashrutam – The Unheard Voice’ premiered in San Francisco in November 2019, ‘The Dream Tree’ premiered in San Ramon in May 2022, and ‘The Maze’ which is currently being developed. She has been supported by the Zellerbach Family Foundation Grant and the CA$H Grant in 2019 to develop and premiere her work. She continues to collaborate, create, and hopes to reach diverse communities through her work.