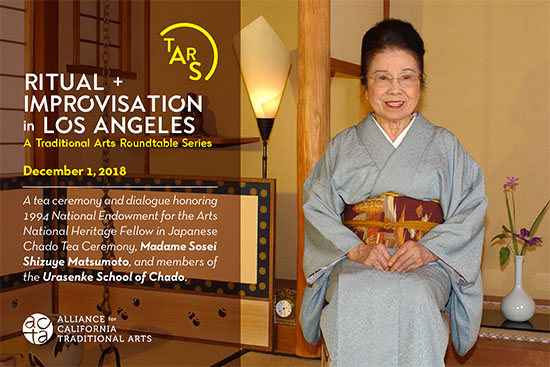 Join us in kicking off this season of our Traditional Arts Roundtable Series (TARS)  in Los Angeles! Meet with traditional and community-based artists and supporters to share practices of ritual and improvisation that help us heal, connect, and build relationships across cultures.

Beginning in 2008, ACTA’s Traditional Arts Roundtable Series was designed to strengthen intercultural traditional arts networks and to offer opportunities for traditional and tradition-based artists and arts advocates to learn from one another through discussion, technical assistance, networking, and sharing community-based arts and culture.

For this season of TARS in Los Angeles, ACTA has partnered with the curatorial staff at the Japanese Cultural and Community Center (JACCC) in L.A.’s Little Tokyo neighborhood to produce a special 7-part season of TARS at the JACCC campus, through June of 2019. In partnership with JACCC, the Smithsonian Institution’s Center for Folklife and Cultural Heritage, and the Japanese American National Museum, we begin our season by honoring 1994 NEA National Heritage Fellow Madame Sosei Shizuye Matsumoto of Los Angeles and the Urasenke School of Chado. We’ll ground the new season of TARS with a Japanese Chado Tea Ceremony in JACCC’s Tea Room at 1 pm, followed by a conversation with her students from the Urasenke School.

The program will also include a community reflection engaging the needs and interests of local artists, cultural practitioners, and those who support that work. This community reflection will help inform the curation of the remaining six roundtables for the season, each taking place at JACCC through June 2019.

Join us and add your voice to the conversation!

The Traditional Arts Roundtable Series is a project of the Alliance for California Traditional Arts. This program is a co-production of the Alliance for  California Traditional Arts, Smithsonian Center for Folklife and Cultural Heritage, Japanese American Cultural and Community Center, and Japanese American National Museum. Partial funding for this program was provided by the Asian Pacific American Initiatives Pool, administered by the Smithsonian Asian Pacific American Center. The TARS series in Los Angeles is generously supported by the Los Angeles County Board of Supervisors through the Los Angeles County Arts Commission. Additional support provided by the California Arts Council and the National Endowment for the Arts.