A Voyage of Discovery: From California to London & Paris In Search of Ohlone Baskets

As you know, I had a very special trip planned for the month of April to study olivella shell & feathered baskets in London and Paris. On Thursday, April 8th, my husband and I flew out of San Francisco, arriving in London the following day. My appointments with The British Museum were scheduled for the following Monday and Tuesday, but it seemed prudent to visit before then to take a look at the basket of my interest, which was on public display in the gallery of the Americas. 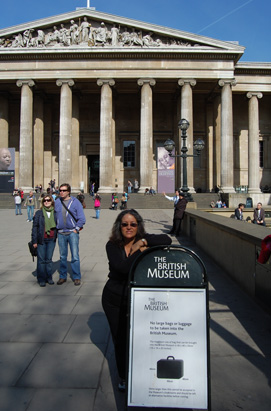 Lighting was so dim that it was very difficult to see anything in detail, but it was nevertheless wonderful to see this basket for the first time “in person” that I had seen in photographs many years earlier. 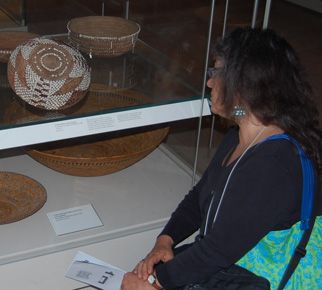 Monday morning arrived, I excitedly reported to the appointed place to meet my gracious hosts, John “Jack” Davy and Devorah Romanek. Jack had already removed the olivella shell basket from the case, along with two other California baskets on display that the British Museum identified as “Costanoan” (Ohlone). I later had to disagree with the attribution for these two baskets, as they appeared to me to be Pomo. But I devoured every minute I had with the lovely little olivella basket. Jack had generously offered the entire day to study the basket, which I happily accepted!

During a quiet moment alone with the basket, I introduced myself to my basket-sister in my Rumsien Ohlone language, telling her of her home in California, that she had been missed all these years and I was happy to meet her. 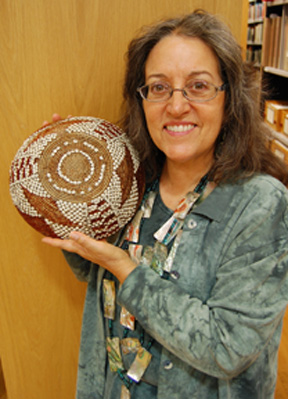 After that, I set to the task of seeing what I could learn from her. I looked at stitches, foundation, start, rim finish, feathers, olivella beads, and more. 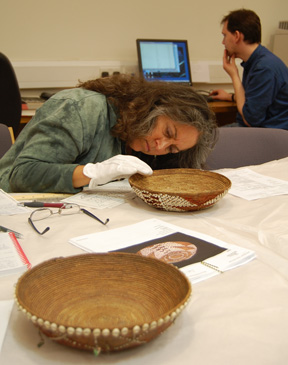 In the following photo, I was measuring the diameter of olivella beads, the number of stitches per inch, and number of rows per inch. 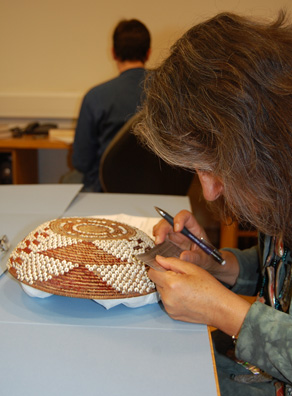 Let me share some of the things I was looking for (and things I discovered). 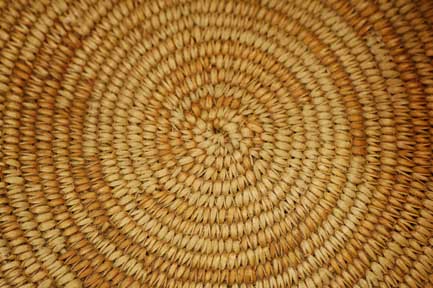 View of the start from the inside. Note the many split stitches, as well as the varied sedge colors. 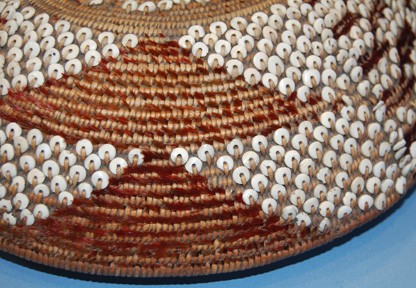 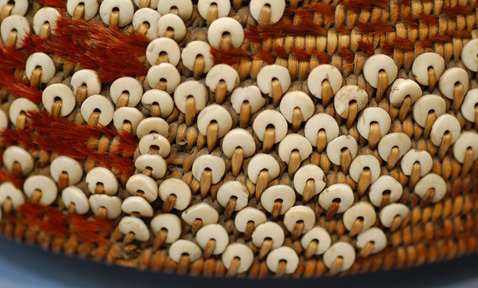 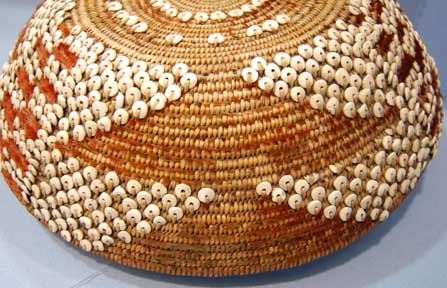 In the photo above, note how the color of the Acorn Woodpecker feathers has faded dramatically. It’s something I had been wondering about & was interesting to see. 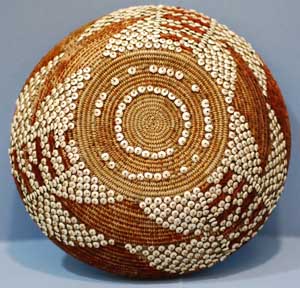 On my second day with the British Museum, it was necessary to travel by bus to their off-site storage facility. It’s here that the materials collected by Vancouver on the coast of California in the early 1790s are kept. I had requested to see a small number of pieces identified as Ohlone or possibly Ohlone by the authors of the book “Time’s Flotsam”.

Upon examining them, along with their documentation, it’s not actually possible to know exactly where the Vancouver materials were collected. In some cases, native plant materials may offer valuable clues, but for now I am content to have learned from them and defer decision on provenance to another time.

In the following photos, I would like to share with you some of the wonderful things I was able to study throughout my second day at the British Museum. 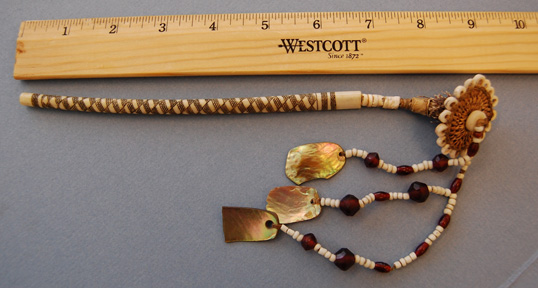 This is an ear ornament collected by Depet (sometimes spelled “Deppe”) in San Jose, California, in 1837. It was exchanged with the Berlin Museum. It consists of a woven basketry disk that was once covered with red Acorn Woodpecker feathers, with many Quail topknot feathers radiating out from behind (now mostly missing). The shaft is an incised bird bone, with dark pigment in the incisions like scrimshaw. It was worn sitting above the ear, much as one would put a pencil over one’s ear, with the basketry disk facing forward & abalone/bead dangles hanging down. See detail below. 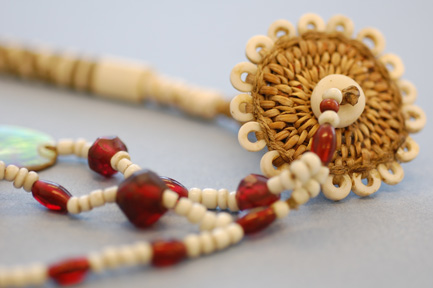 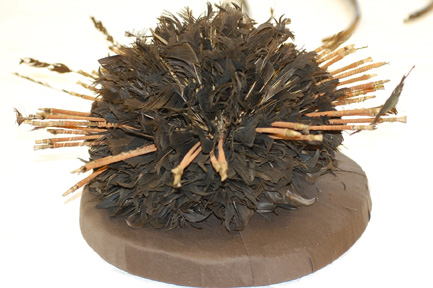 This feather headdress (above), made of what appears to be Crow feathers, was also collected by Depet in San Jose & exchanged with the Berlin Museum at the same time as the ear ornament.

Above is a feather band made of split Brown Pelican feathers attached with cordage. Below is a net bag. 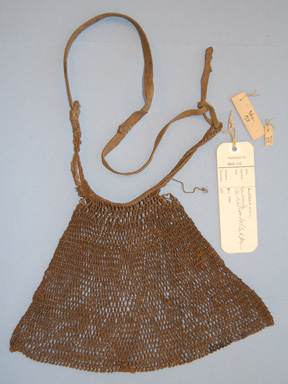 From London, we crossed the English Channel by high-speed train via the “Chunnel,” arriving in Paris on a sunny spring morning. We made the trip on Thursday, as my original appointment with the Musée du Quai Branly had been for Friday. The appointment was subsequently rescheduled for the following Monday after museum staff agreed to remove the glass and allow me to see the baskets outside the exhibit case, which could only take place on a Monday. So we had a few days to get acquainted with central Paris and learn to navigate the city’s very efficient metro system.

Museum staff had given me an appointment, and after some pleading, had agreed to remove the glass from the case. But they had also given me only one short hour to spend with their two olivella baskets! Normally, I have spent several hours with just a single basket, so I was very nervous about being as well-prepared as possible and using my time to the best end. One of my strategies was to visit the museum in advance, to see what I could learn through the glass. So one of our first items of business was to find the Quai Branly Museum, which is very near one of Paris’ most famous icons, the Eiffel Tower. 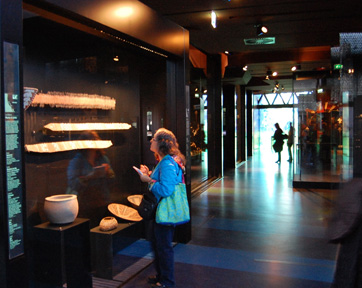 This beautifully presented museum is approximately seven years old, and showcases the ethnographic collection once housed in the Musée de l’Homme. Upon locating the California exhibit, I was relieved that I had convinced staff to allow me time with the baskets outside the glass case, because the museum lighting is outrageously dim. I was having trouble seeing the larger basket at all, because it is mounted up rather high and there were terrible reflections on the glass. But at least I got a peak at the two baskets and would have to wait just a couple more days to meet them up close and personal.

Monday morning arrived and I had set my phone alarm for 6 a.m. so I’d have plenty of time to get ready for my appointment and make the 30-minute walk from our hotel to the museum. At 6:00 my phone sounded and I assumed it was my alarm. Instead it was a phone call from American Airlines, with the unwelcome news that our Tuesday flight home had been cancelled due to the well-publicized volcanic ash cloud that had shut down most of Western Europe’s airspace in recent days.

I was numb with this news, and spent the next hour on the phone trying to schedule another flight home. The earliest flight we could get was for the following Sunday, meaning we would be spending an extra five days in Paris. How we would manage this I wasn’t sure, but I had come many thousands of miles to see these two baskets and now had to hustle to be there at the appointed time.

Correspondence with the Quai Branly Museum had been much more difficult than the British Museum and I was a little nervous about the reception I might receive. But after we arrived and began to talk, they were very warm and friendly, and seemed genuinely excited at my visit and what they would learn.

Because time would be short, I got right down to work, beginning with the basket that for many years I’ve referred to as the “Dombey basket.” Joseph Dombey was a French explorer, doctor, naturalist and archaeologist who collected the basket between the years 1778-1785 in Chile or Peru. However, the basket’s plant materials, olivella shell beads and technical features identify it as likely Ohlone, and I’ve wished for many, many years to be able to see it in person! 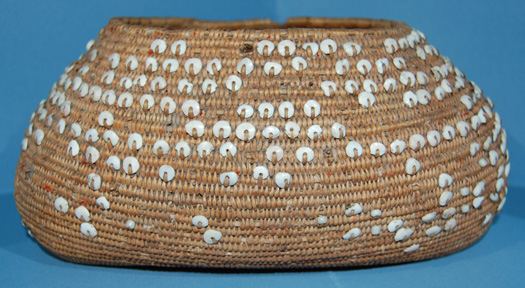 This basket is unique in a couple of ways, namely its shape, which is elongated rather than round, and the fact that the olivella disk beads are flipped upward rather than downward. These two facts I already knew from photos I had seen previously. What I didn’t know from those photos was whether the basket once had feathers. Close inspection revealed the remnants of red feathers, although apparently much more sparsely applied than other olivella & feathered baskets. I initially assumed that they were Acorn Woodpecker, but something was inconsistent—the base of these feathers are not dark grey like Acorn Woodpecker feathers, but rather are white! Red feathers with a white base … in my experience, these can only be Redwing Blackbird! I was particularly excited by this because I have found a couple of ethnographic statements made by Ohlone elders who lived before my time saying that our baskets sometimes included Redwing Blackbird feathers. Yet I had never seen them in any baskets.

If you look closely, I think you’ll be able to see this in the following photo, at the rim near the center. 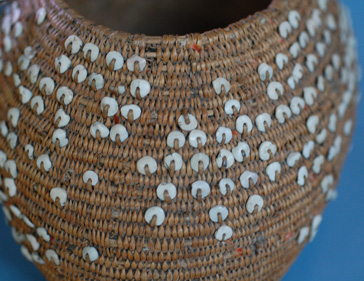 In my haste, having been allotted only one hour (which actually stretched out to be considerably longer!) I neglected to notice that the weaver had attached not only olivella beads but had also interspersed several white ceramic beads. These are located in the lower region of the basket, and are visible in the photo below. I was in such a hurry that I didn’t notice these on the day of my appointment, but saw them when I returned to the museum the following Friday to take one last look at the baskets in the exhibit case. Had my flight not been cancelled, I would have returned home on Tuesday and therefore not have visited the museum on Friday to notice this last little surprise! 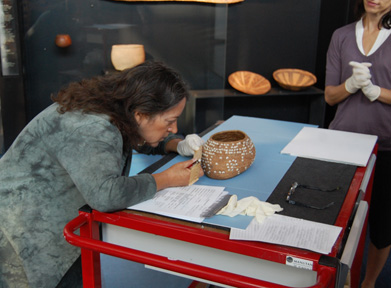 Last, but certainly not least, I turned my attention to perhaps the most spectacular of the baskets I have had the pleasure to meet. It is quite large, heavily feathered with Acorn Woodpecker feathers and has a wonderful pattern of olivella beads. A row of clamshell disk beads encircles the rim and there are three decorative clusters of Quail topknot feathers that hang downward and apparently once also included brilliant red Acorn Woodpecker scalp feathers as well. 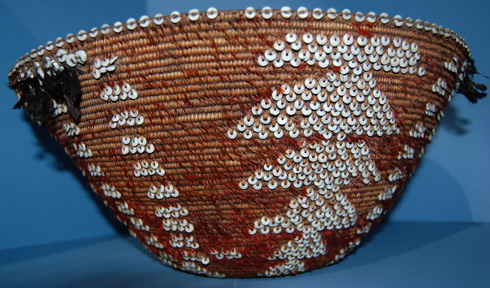 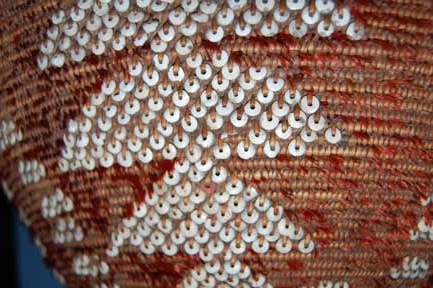 The wonderful surprise of this basket would have to be the sprinkling of olivella disk beads on the inside surface of the basket, which you should be able to see below. 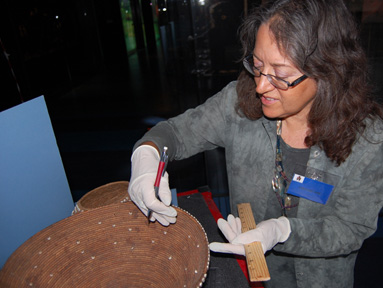 My sincere thanks go out to the staff of both the British Museum in London and the Musée du Quai Branly in Paris, for their warm hospitality and gift of their time. Staff in both museums took copious notes relating to native plant materials and technical observations, which will add to their accurate knowledge of these California treasures.

This was certainly a voyage of discovery, not entirely unlike those of two centuries ago, rife with adventure, but undeniably safer and easier to accomplish!